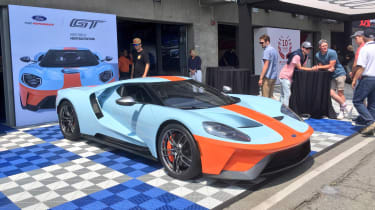 Already the subject of a hundred renders on the internet, Ford has announced the GT Heritage Edition, partnering with Gulf to produce a limited run of its supercar in motorsport’s most recognisable livery.

Produced for the 2019 model year, the Heritage Edition celebrates the 50th anniversary of the Gulf-liveried GT40’s win at the Le Mans 24 Hours - something it repeated in 1969, in turn securing the GT40’s fourth overall victory at the race and sealing the model’s place in history.

Revealed alongside that winning car at the Rolex Monterey Motorsports Reunion event at Laguna Seca in California - chassis 1075 the two-year run of Heritage Edition models will feature numerals celebrating the two Gulf GT40 wins, with 2019 cars wearing the number 9, and 2020 models carrying number 6. Rather than being painted on, the numbers will expose the carbonfibre below. 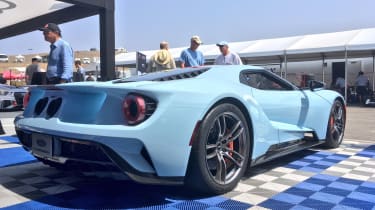 Inside the seats, steering wheel, instrument panel, pillars and headliner are wrapped in ebony Alcantara, with Gulf-themed blue and orange stitching for the wheel and seats, as well as an embossed pattern inspired by that on the winning GT40. More exposed carbonfibre can be found on the door sills and centre console in a matte finish, and each car will get an identification plate bearing its number in the line.

Mechanically the Heritage Edition is unchanged - though given the standard GT produces 638bhp from its 3.5-litre twin-turbocharged V6 and is, under the skin, little different from the GTs racing in the World Endurance Championship, not a great deal has been left on the table in terms of performance... 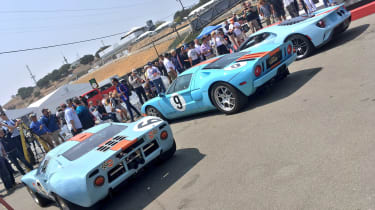 Notably, particularly when compared to the similarly-painted version of the previous Ford GT, the Heritage Edition now features the same shades of blue and orange as the race car, though the livery does lack the thin dividing stripe between the blue and orange segments.

The three generations of GT took part in two celebratory laps at the Laguna Seca circuit following Friday’s practice and qualifying activities at the circuit, with the Heritage Edition set to reappear on Saturday at Cannery Row in Monterey and again on Sunday at the Pebble Beach Concours d’Elegance.