This is the McLaren 720S Spider, with a glass folding roof and stunning glass buttresses 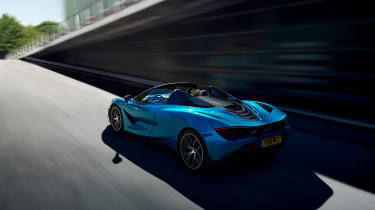 The McLaren 720S has been shocking crowds with its dramatic styling and endless wins on drag strips for a couple of years now, so it’s not surprising to see a Spider version arriving just in time for Christmas.

Like the 650S Spider that came before, the 720S features a folding hard-top arrangement that slips beneath a folding tonneau situated on top of the familiar 4-litre twin-turbocharged V8 engine. Either side of the tonneau are two buttresses, now split into two pieces. One is constructed of carbonfibre and houses the Spider’s rollover protection while the other is glass, maintaining the coupe-like silhouette. This use of glass was apparently designed for two reasons: first to improve over the shoulder visibility, but also keep the new Spider close to the standard Coupe’s glassy cockpit-like aesthetic.

The roof itself comes as standard in carbonfibre, but this can also be specified in electrochromic glass, allowing the driver to switch between a clear and opaque finish at the touch of a button. In order to facilitate the new roof and its powered mechanism, McLaren had to redevelop the Coupe’s Monocell II carbon tub, removing the central spine and redesigning the rear shelf. Despite the removal of the tub’s central spine, no extra bracing was required so the total weight is only up 49kg to 1332kg ‘dry’, without any effect on torsional rigidity. 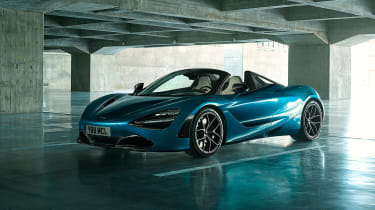 As a result, performance is mostly un-affected versus the coupe, with 62mph taking just 2.9sec, 124mph in 7.9sec and a top speed of 212mph with the roof up, and 202mph with it down.The powertrain is also unchanged, comprised of the familiar 4-litre twin-turbo V8 engine producing 710bhp, with 568lb ft of torque.

To address the 720S Spider’s new aero balance, the active rear wing is now deployed on a different set of parameters, actuating at different points whether the roof is up or down. The rest of the dynamic package is borrowed from the Coupe, with the same Proactive Chassis Chassis Control II cross-linked hydraulic suspension and hydraulic steering systems.

> Click here for our drive of the Ferrari 488 Spider

Along with the new body are two new colours in the standard 720S pallette and a new ten-spoke wheel design. If these finishes don’t work for you, McLaren Special Operations is always on hand to make your McLaren convertible that little bit more personal, if your pocket book allows.

Priced from £237,000, it represents a premium of £28,400 over the Coupe, and is over £30k more than a Ferrari 488 Spider. Orders are being taken now, with customer deliveries commencing in March next year. 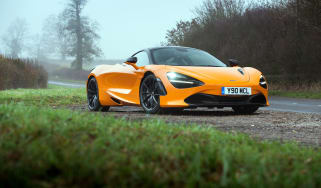