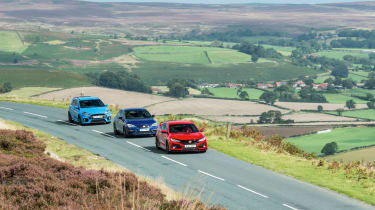 It’s decision time. So which of these three very hot hatches is our clear winner?

We could tease out the winner of the test, but there’d be no point because in he final reckoning the Honda walks it. No matter which way you cut it, the Civic comes out on top thanks to its staggering breadth of abilities. It’s no exaggeration to say that the Type R redefines what’s possible for a hot hatch – either front or four-wheel drive.

‘It bristles with capability, seriousness, competency, aggression’, enthuses Towler. ‘It successfully melds the outrageous performance people expected with old fashioned, but extremely relevant, qualities of interaction. It feels like a special car, honed for the task by a team on top of their game.’ 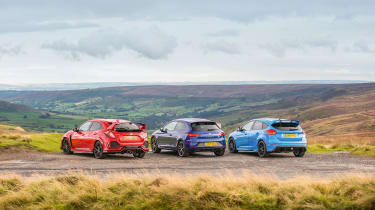 The fact it was fastest around the track, is the most spacious and practical day-to-day and won’t cost the earth to run is the icing on top of the Honda’s hard earned victory cake. We even got used to the looks.

Deciding between the Ford and SEAT was trickier, because despite having very different takes on the hot hatch formula, they’re both desirable propositions. Yet when the shouting subsided, it was the Focus that emerged just ahead. Its hardcore ride, compromised driving position and wide boy image are demerits, but when you start to push on, the RS’s ability to engage and entertain is unquestioned, plus the novelty of a hot hatch that handles with a rear-drive swagger never really wears off. Towler again, ‘The Ford seems weighed down by expectation and marketing involvement, but get it on a challenging road and its qualities really shine through. It's one of those cars where you can throw any surface, camber or bump at it at very high speed and know that the chassis will respond.’

So that leaves the SEAT holding the wooden spoon. The Spanish flyer used to be one of our favourites, but the pace of change in this class has left the Leon languishing. That’s not to say the Cupra doesn’t have its charms. We’re huge fans of its lightweight construction and ferocious performance, plus when you’re in the mood it’s a genuinely exciting machine, but push it as hard as the other two and it quickly unravels.

And that’s not all. ‘I can’t understand why it looks so ordinary,’ muses Ingram. ‘A more adventurous bodykit would help it stand out, while inside it needs a set of decent seats at the very least.’ Perhaps more pressingly, SEAT needs to launch a Sub8 pack for this latest 300 version, because we’re convinced that this would address some of the Leon’s weaknesses. Even so, it’s unlikely even an upgraded Cupra could topple the remarkable Honda. In fact, it’s going to take something spectacular to knock the Type R of its top spot. Over to you, Renault.