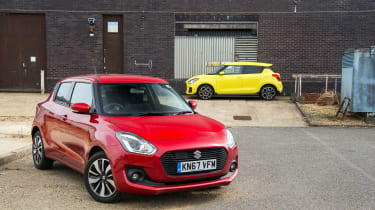 There’s no diesel option in the new Swift, just a selection of relatively small-capacity petrol engines – just the sort that should live in the front of the supermini. The entry-level and least powerful motor is a 1.2-litre four-cylinder naturally aspirated engine; it’s the only motor you can get in the basic SZ3 trim. The engine uses twin fuel injectors(!), and both are active, unlike the secondary set in a Ford Sierra RS500 Cosworth – however, that really is the only trump card the Swift has over a RS500. The 1.2 puts out 89bhp, while maximum torque is 88lb ft at 4400rpm. 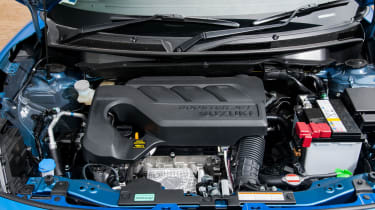 The next most powerful engine is a smaller capacity 1-litre three-cylinder engine, but thanks to a turbocharger it produces 109bhp and 125lb ft of torque available from 2000rpm to 3500rpm when it’s paired with a five-speed manual gearbox – the combination you’d get if you bought the Swift SZ-T. Go up a trim level to SZ5 and you can have that engine with a six-speed auto, while torque drops slightly to 111lb ft but peaks earlier at 1700rpm and stays there until 4000rpm.

There are a few other drivetrain options for the Swift in SZ5 trim, too. You can have the same 1-litre turbo engine and manual gearbox as the SZ-T, but with a mild-hybrid system. The SZ5 with SHVS (Smart Hybrid Vehicle by Suzuki) gets a boost from an electric motor that replaces the starter. The SHVS electric motor only has 2.3kW (3bhp) on offer, but a more credible 37lb ft of torque. Or, if you don’t mind having the 89bhp engine from the basic model, you can have your SZ5 with four-wheel drive and the hybrid assistance.

The Swift Sport’s 1.4-litre engine is also boosted by a turbocharger with a clever wastegate valve that closes fully under high loads to maintain inlet pressure and a bypass valve that opens to keep air moving through the intake system and eradicate turbo stall when the throttle closes. The engine produces a maximum power of 138bhp and peak torque of 170lb ft is available from 2500rpm to 3500rpm. 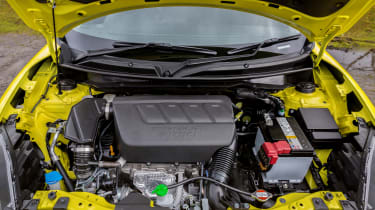 The Sport doesn’t just have a more powerful engine than the more regular models, there’s a six- rather than five-speed manual gearbox and a host of chassis and drivetrain improvements, too. There are the bigger wheels, stiffer springs, uprated anti-roll bars, improved dampers and larger brakes that you’d expect. There’s also reinforced front hubs and rear trailing arms that can sustain greater lateral forces than the regular car’s suspension without camber or toe changing adversely under load.