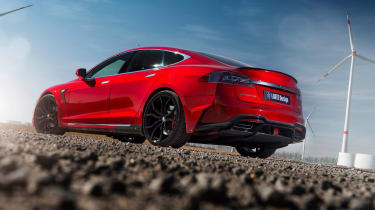 The market for tuning Teslas is growing in parallel with the manufacturer’s sales, but until now most changes have been limited to consumers in other markets.

Voltes Design is changing that, now allowing UK customers to alter the looks of their Tesla Model S with a selection of body styling packages.

Those include kits from Unplugged Performance in California and Larte Design in Germany, each of whom has added a dose of visual aggression to the sleek but slightly indistinctive styling of Tesla’s electric fastback.

‘Tesla performance is an eye-opener, but while it is true there are those who like the discreet design of the standard car, there are others who would prefer their Tesla to look more edgy,’ explains David O’Connor, founder of Voltes Design.

The company will supply a range of parts for both the car’s exterior and interior – from carbonfibre rear lip spoilers and rear diffusers, to carbonfibre seat back trims. 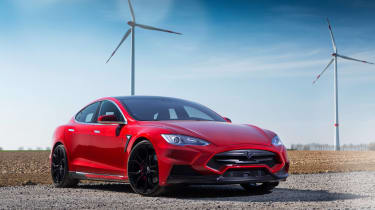 Full exterior styling packages are also available from both Unplugged Performance and Larte. The latter, dubbed Gen-SS by Voltes (the red car in these images), lends a much sharper look to both the front and rear of the car, while vinyl wrap options will give buyers extra finish options over the small selection offered by Tesla.

Further interior changes will also be available, including upgraded sound system options and storage solutions for the relatively spartan cabin. Also coming soon are upgrades for the Model X.

One thing Voltes doesn’t yet change is the car’s performance – the Model S already has ‘supercar performance’, according to O’Connor.

All upgrades will be available to order online, before fitting at specially selected body shops around the UK.