The Tesla Model S saloon to receive another level of performance, jumping from Ludicrous to Plaid… 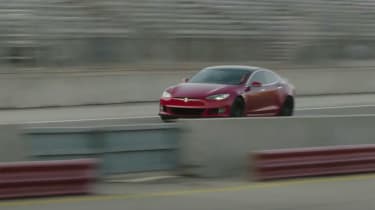 Tesla CEO Elon Musk has revealed details of a new range-topping Model S Plaid at its 2020 shareholder conference, revealing the new performance EV that is proposed to cost from £130,980 in the UK and reach customers in late 2021.

Rumours of a new top-tier Model S have been circulating for quite some time, with test mules spied on different circuits all over the world, but only now do we know the technical updates it plans to offer. This will include a triple-motor, all-wheel drive layout for power and performance figures usually reserved for seven-figure hypercars.

Tesla claims that the Model S Plaid will produce in excess of 1000bhp, enough for a 0-60mph time of under 2sec and a top speed of 200mph. The quarter-mile sprint is said to happen in less than 9sec, which is faster than any production ever – for reference, the 1479bhp Bugatti Chiron covers the distance in just shy of 10.

Tesla also claims that it lapped Laguna Seca in 1:30.3, smashing the 1:36.5 time the brand set in an earlier development car last year. Musk commented: ‘We think there’s another 3 seconds or more to take off that time, so we’re confident the Model S Plaid will achieve the best track time of any production vehicle ever.’ The current production car record around the US track is held by the McLaren Senna, with a time of 1:27.62. This in our experience feels extremely ambitious as the current Model S, no matter the derivative, is certainly no sports car, and proof that fast initial acceleration doesn’t automatically make for an impressive performance car.

It’s not yet clear how the Plaid will differ in design to its more ordinary counterparts, with no changes to be seen inside or out on the configurator preview. Development models, however, have featured a wider track, flared arches, alterations to the front air intakes, a large front splitter and a substantial ducktail spoiler at the rear.

In April, Musk revealed on Twitter that the brand would ‘simplify Plaid a little’ as it was becoming ‘too complex,' perhaps an explanation for the lack of extreme bodywork and aerodynamic components on the production variant. 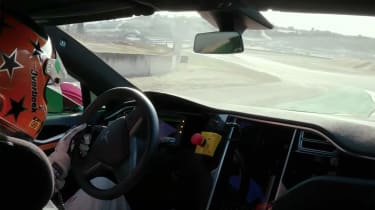 These ambitious claims are typically aimed over and above the Porsche Taycan Turbo S, but Tesla now also has the $169,000 Lucid Air Dream Edition as a potential competitor. The Air’s 1065bhp output is impressive, but 0-60mph comes at 2.5sec with top speed and the quarter-mile time lacking, at 168mph and 9.9sec respectively. Nonetheless, range on both models is almost identical with each said to cover around 520 miles on a single charge.

The Tesla Model S Plaid will start from £130,980 in the UK, with first deliveries scheduled to begin in late 2021. Prospective buyers can already lock in an order with a £1000 deposit.