Tesla Model S Shooting Brake takes to the the road

A specially-commissioned, Tesla Model S Shooting Brake is now on the road with claims on the ‘world’s fastest estate car’ title 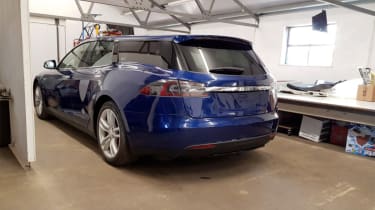 Automotive design and engineering firm, Qwest, has produced a Tesla Model S Shooting Brake, which it claims is the world’s first and quickest EV Shooting Brake. Seeking to squeeze some extra practically from the Tesla Model S, a customer commissioned Qwest to convert his P90 D into an estate. The basic cost of the conversion was said to be around £70,000, excluding the donor car.

Jim Router, Qwest’s Engineering Director, designed the new hatch extension, which is constructed using carbonfibre rather than the aluminum used for the standard body – resulting in weight savings in excess of 10kg. As a result, performance remains unchanged, so the estate-bodied Model S sprints from 0-62mph in 2.8sec (Ludicrous mode) – alongside the Porsche Panamera Turbo S E-Hybrid, it’s the fastest estate currently out there.

Qwest sought assurances from Tesla that the car would maintain access to the Tesla network, which includes the regular system updates and real time infotainment functions. In response, Tesla outlined criteria for Qwest to follow, which if satisfied, would ensure the car retained support from HQ.

The owner’s key concern when commissioning the Tesla Model S Shooting Brake was said to be enlarging the boot area to accommodate his dogs. The animals were previously short on headrom due to the Model S’s sloping roofline in its standard hatchback bodystyle.