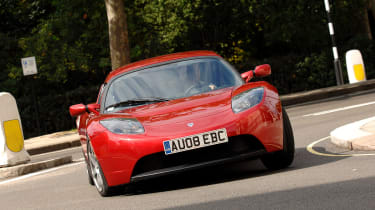 The Lightning may still be at the concept stage, but one electric sports car that’s already on sale is the Tesla Roadster. With 1100 orders already taken, production has now started at the Lotus factory in Hethel, Norfolk, with the first cars due to be delivered to customers in the US in October.

The first 250 cars have been deemed special editions and will come with a number of extras as standard, amongst them a unique wheel design. This initial run will also include a number of EU cars – some for the UK – which will start rolling off the line in May 2009. The plan is to ramp up production to 2000 cars a year by 2010.

The company had hoped its Roadster would hit the streets in 2007, but durability problems with the unique two-speed transmission units the car was originally going to use put a stop to that. In the end the two-speed unit had to be abandoned and replaced with a single-speed gearbox design that could be built in-house, alongside the bespoke 248bhp, 280lb ft, 14,000rpm electric motor. The only problem then was figuring out how to meet the original performance targets without the two-speed ’box…

The solution was to raise the maximum current released from the battery pack from 600 amps to 850, enabling a 0-60mph time of 3.9secs and a top speed of 125mph.

These seem like bold performance claims, but having now driven a Tesla in anger, I can tell you that this car is laugh-out-loud fast. Think of an Elise into which someone has installed a 5-litre V8 equipped with the mother of all silencers and you’ll have some idea of what it is like to drive. It’s also surreal how no-one takes any notice of the car in traffic because of its silent progress and tiny dimensions.

Perhaps the best news is that the steering still feels like that of the Elise it is based on and that joyous Lotus sensation of minimal inertia still filters through to the driver, despite the massive 450kg battery pack strapped on top of the electric motor.

That power pack is made up of 6831 lithium-ion cells that, according to Tesla senior vice president Darryl Siry, costs around £11,000 to produce. It should last five years or 100,000 miles before it needs replacing, but with battery prices falling by around 3 per cent each year and capacities increasing by 8 per cent annually, that problem should diminish with time.

One problem with this type of battery is that it only operates efficiently in a narrow temperature range, so energy has to be expended to keep its temperature constant, and while the battery’s capacity is equivalent to 53kWh it takes 70kWh to charge thanks to energy losses (as heat) during the charging process.

The idea of charging it overnight (it takes eight hours to get a full charge from a domestic supply) at a cost of around £8 for 220 miles of motoring is still massively appealing, though. Pity the car’s £92,000 price tag means only the wealthy will be able to benefit.

Tesla has plans for other, more affordable models, though, namely a coupe, saloon and SUV, each costing around half the price of the Roadster. The three models will have aluminium bodies and share the same basic layout consisting of the Roadster’s motor and gearbox but with all-new, flat battery packs that will make up the vehicle’s floor. Production numbers are expected to be around 20,000 units annually across the three models.

Sound far fetched? Just remember that Tesla chairman Elon Musk was the co-founder of online payments company PayPal – and its largest shareholder before it was sold to eBay for $1.5bn – so funds at Tesla aren’t exactly short…