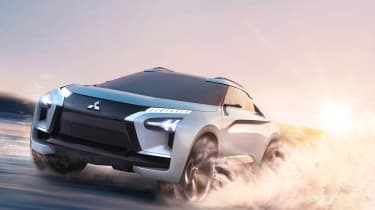 Mitsubishi has revealed its flagship concept car at the 2017 Tokyo motor show in the form of the e-Evolution concept, an electric SUV with autonomous driving capability. Shocked? Didn’t think so, but aside from the questionable application of the Evolution moniker, is the e-Evolution a glimpse into the future of Mitsubishi or just another faceless concept from a company struggling to keep up?

The concept’s drivetrain is made up from a total of three electric motors. A single, high output unit is located on the front axle powering the front wheels, while at the rear are two further motors, controlled via an Active Yaw Control system. This system gives the e-Evolution a full torque vectoring function, affording at least a modicum of technical relation to the iconic all-wheel drive Lancer Evolutions of the past.

> Click here for our review of the Mitsubishi Evo X

Mitsubishi has also included what it is calling 'Artificial Intelligence augmentation of the driver and vehicle performance'. According to Mitsubishi, the system will read road conditions through a set of input sensors and ‘co-ordinate the deliverable performance and setup to best adapt to the situation’ whatever that means. It will also offer ‘driver coaching’ but don’t expect Tommi Mäkinen giving pointers from the passenger seat, the tips are very much designed to improve safety. 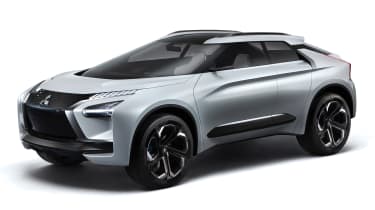 What the e-Evolution is more likely to preview is Mitsubishi’s future design language. In anticipation of the forthcoming Eclipse Cross, the e-Evolution takes the same aesthetic, but combines it with some very in-fashion split headlights and wraparound glass running around the front and rear screens. The concept does take advantage of the proportions afforded by the EV drivetrain, with short overhangs and a cab-forward profile.

Mitsubishi’s drive to become a more sustainable, and therefore successful, mainstream manufacturer might come at the expense of its performance heritage, but after its acquisition by the Nissan-Renault alliance, the concept does point towards a new design and technological direction for the brand.

> Click here for our preview of the 2017 Tokyo motor show

Mitsubishi has not mentioned whether this concept is just a design study or could preview a future production model, but there is no denying it would be a big disappointment for us in the evo office if the sacred Evolution moniker was applied to an SUV.

While this might not be the news fans of the iconic Evolution models will want to hear, the good news is that the Japanese brand does at least look to be on a path to revitalisation after struggling for years with an ageing model line-up that failed to match the best of its Japanese and European rivals.