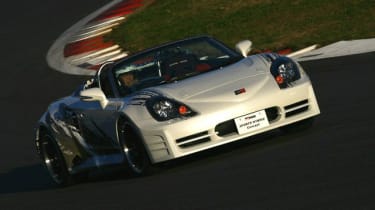 Toyota and racing partner Gazoo have come up with something utterly intriguing. Meet the oddball MR2 Sport Hybrid Concept. Dubbed the GRMN (Gazoo Racing Master of Nurburgring), the purpose of this car is clear: It’s a ‘ring-basher like none before it. Gazoo has quite a history racing at the Nordschleife, successfully racing both Toyota and Lexus cars in endurance racing for many years.   Loosely based on the now extinct mid-engined MR2 roadster, on paper this car looks ready to go toe-to-toe with the Honda CR-Z. It's far more powerful than that, though. At slow speeds, this hybrid’s front wheels are electronically powered thanks to Toyota’s THSII system. Mash your foot into the carpet however, and a 3.3-litre V6 behind the cockpit fires into life and sends internally combusted power to the rear wheels, too. This means a total power figure of ‘more than 392bhp’.  As usual, the lithium-ion battery packs have an unfortunate impact on the car’s weight. At 1500kg, this MR2 is over 50 per cent heavier than the slimline 975kg roadster it’s based on. Still, a minimum 266bhp/ton figure and that mid-placed engine should ensure it’s still a decent drivers’ car. A 4.5sec 0-60mph-time is rumoured. There’s speculation that a car based on the GRMN could go on sale in 2011 to compete with the slightly tamer Honda CR-Z. Keep an eye on evo.co.uk for the latest. Read about the Toyota and Gazoo GT-86 rear-drive sports car Follow evo on Twitter or Facebook for latest car news and views