While the EV revolution continues, so too does Toyota’s hydrogen fuel-cell development 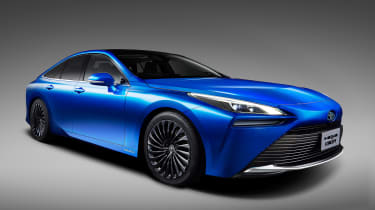 Toyota has revealed a near-production concept version of its second-generation Mirai, the marque’s hydrogen fuel-cell saloon. While battery electric vehicles are quickly gaining momentum as the environmentally friendly option for private car buyers, hydrogen fuel-cell technology has been in constant development alongside it, with manufacturers such as Toyota, Honda and Hyundai all now having production fuel-cell models on the road.

Tellingly, the new Mirai is built on Toyota’s modular TNGA platform, one shared with everything from the Prius to the Camry, helpfully reducing per-unit production costs of a model that has always been a loss-leader due to its expensive hydrogen fuel-cell powertrain.

Unlike a traditional internal-combustion powertrain, the hydrogen fuel-cell works by generating electricity by a chemical reaction with no associated emissions aside from water vapour. This electricity then powers an electric motor, which in the Mirai’s case sits on the rear axle, providing drive.

Toyota claims to have made great strides with how the Mirai drives, with an increase in range and performance, and improved drivability. Toyota had a target of increasing range by 30 per cent, which it says has been achieved by both improved system efficiency and increased hydrogen storage capacity.

The inherent advantage of a hydrogen fuel-cell powertrain is its non-reliance on the grid, which so often is the defining aspect of the argument about how clean battery electric vehicles actually are from a well-to-wheel perspective.

The previous Mirai’s Prius-like body has been replaced with a somewhat more traditional, but also more elegant saloon shape. It’s more understated look is not so much a change in aesthetic for the Mirai, but rather one in philosophy, as Toyota intends for the Mirai to be less of a statement car and instead an established part of its progression into alternative powertrains across the range. 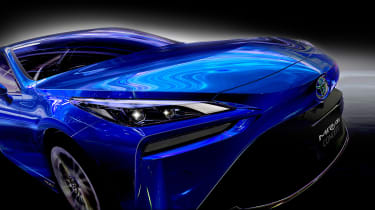 The new, display-heavy interior is suitably plush considering its status within the Toyota range, but retains a very pleasing aesthetic that is distinctively Japanese. The new 12.3-inch touchscreen sits high on the flowing, minimalist dashboard, with a smaller Lexus-style cowled driver display behind the steering wheel, while copper-coloured accents frame and highlight the dash, doors and seats.

Fuel-cell technology may be in its infancy compared to battery technology, but many experts believe that hydrogen fuel-cell vehicles, rather than replacing BEVs, will coexist alongside them as part of a wider answer to the issues facing internal combustion engines. Our conundrum is where there is at least a link – albeit a tenuous one – between electric vehicles and driving thrills, hydrogen fuel-cell vehicles have still yet to form one. The new Toyota Mirai doesn’t look to change that.