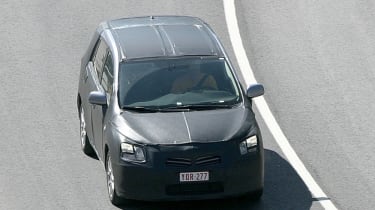 While it’s still a good car and a viable alternative to people-movers like the Volkswagen Touran and Ford Focus C-Max, the Toyota Corolla Verso is beginning to show its age.

But Toyota's working on a replacement, likely to be called the Auris Verso, and the name suggests the car is sharing a lot with the hatchback Auris. This goes also for most of the range’s petrol and diesel engines. However, judging from what's visible in these exclusive spy-shots, the exterior mimics the design of the future Avensis more than that of the current Auris. Both, Auris Verso and Avensis, will be officially launched in the first half of 2009.