Toyota's working on a new MPV, likely to be called the Auris Verso, and the name suggests the car is sharing a lot with the hatchback Auris 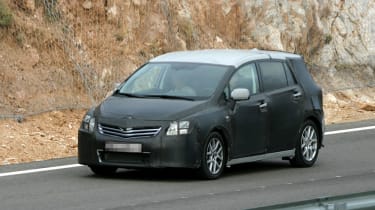 Judging from what’s yet visible in these exclusive spy-shots, the exterior mimics the design of the future Avensis more than that of the current Auris. Both, Auris Verso and Avensis, will be officially launched in the first half of 2009.

The current car was released in 2004 and continued to carry the Corolla Verso name plate even after the facelift in 2007. However, this long name won’t be necessary anymore after production of the Toyota Yaris Verso was stopped in 2006 and the Avensis Verso is quite unlikely to get a successor. In short: the car pictured here might drop the Auris name altogether in favour of a shorter Verso name plate.