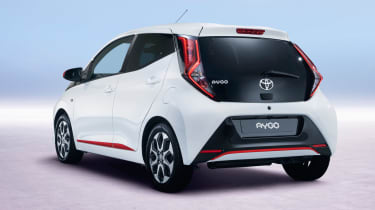 Four years into its model life the second-generation Toyota  Aygo has been granted a facelift, bringing some extra performance, refinement and visual updates.

The 1-litre, three-cylinder engine has been upgraded with new injection hardware, a cooled exhaust gas recirculation system and additional low-friction components. Toyota has also modified the balancer shaft to reduce vibration at idle. The above changes take total power to 71bhp, and bring the engine in line with Euro 6.2 emission standards.

There are no major chassis changes to note, although Toyota confirmed the suspension and steering systems have been modified. Elsewhere, Toyota has attempted to improve refinement, with extra sound deadening behind the dashboard, front pillars, doors and rear deck.

On the outside, few will mistake it for a brand new model, with the distinct X-shaped nose still present, however the addition of LED headlights, a new grille and re-profiled front apron lend the Aygo a refreshed look. Aside from the front-end tweaks, new tail lights are the only other aesthetic alteration to the exterior.

As for the interior, the updates are even less dramatic, with new backing graphics for the instrument cluster, as well as an updated selection of trim finishes and seat fabrics to choose from.

Following its public debut at the 2018 Geneva motor show, the Toyota Aygo will go on sale later this year. However, Toyota is yet to disclose full pricing for the city car.