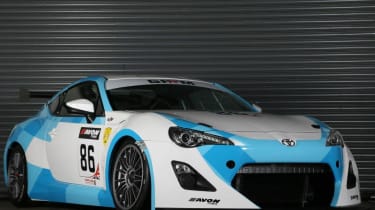 The Toyota GT86 is turning into a bona fide racing car. After competing in the 2012 Britcar 24-hour race (and finishing third in class with the help of evo’s Richard Meaden), a GT4-spec GT86 will begin track testing this month. It’s the work of Buckingham-based engineering firm GPRM, but has the blessing of Toyota GB. It uses a 2-litre boxer four-cylinder engine, like its road equivalent, but it’s turbocharged, with claims power could be as much as 400bhp – more than double the showroom-spec 197bhp. The final figure will be determined by the GT4 series’ balance of performance tests. GPRM has designed its GT86 GT4 to be a cost-efficient, entry-level endurance racing car. The project began after the 2012 Britcar success, where a near-standard GT86 did so well.