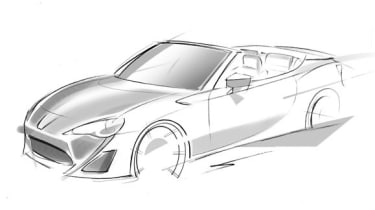 A Toyota GT86 convertible will debut at the 2013 Geneva motor show. A drop-top version of the rear-drive coupe – plus its Subaru BRZ twin – has long been rumoured, and this official Toyota sketch, plus spy shots of a white prototype in action, have confirmed its existence. While production is yet to be confirmed, a cabriolet GT86 would bolster its position as Toyota’s new image maker, even if a less rigid version does jar with the car’s driver-focused sales pitch. Sales would likely be strong in America, where the model is sold as the Scion FR-S. The roof is almost certain to be fabric rather than a folding metal hard-top, helping to keep the GT86’s weight below 1300kg. This official sketch suggests the back seats will remain, though with room in the coupe’s rear quite minimal, it wouldn’t be surprise if these were lost for production if more space is required for the roof’s mechanism. The production GT86 convertible would almost certainly keep the coupe’s 197bhp, naturally aspirated boxer 2-litre engine and choice of six-speed manual or automatic gearboxes. A starting price of around £27,000 seems likely. More information and, of course, official images of the open-top Toyota GT86 will be revealed closer to its Geneva reveal in March, where it will share stand space with a new RAV4 SUV and Auris Touring Sports estate.