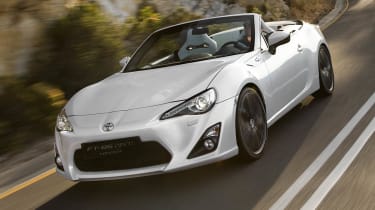 Toyota has released photos of the Toyota FT-86 Open Concept – which previews a convertible version of its GT86 sports car – following preview sketches last month. The car will make its debut at the 2013 Geneva motor show where it will be shown to gauge public reaction, though a production version is nigh on certain. The FT-86 Open Concept features the same 197bhp, 2-litre four-cylinder boxer engine as the coupe, which can be mated to six-speed manual and automatic gearboxes. The FT-86 Open features a folding fabric roof as opposed to a heavier folding metal hardtop, and just like the coupe, will have a 2+2 cabin. The introduction of the convertible roof mechanism will no doubt add some additional bulk to the standard 1240kg GT86’s kerb weight – although Toyota has said that it will concentrate on keeping the weight of the roofless GT86 to a minimum, meaning the car should not creep much above 1300kg.  This means performance should not differ hugely from the GT86 coupe, with a 0-60mph time of around 7.7sec and a 135mph top speed good estimates for a manual-equipped car. Inside, the cabin is almost identical to the coupe, but as this is a concept it features a slightly garish white, blue and yellow interior colour scheme. A production-ready Toyota GT86 cabriolet would command a premium over the coupe, pricing it at around £27,000, with its key rivals ranging from top spec Mazda MX-5s to basic Nissan 370Z and Audi TT roadsters.

See the Toyota GT86 coupe in action below...