The Toyota FT-1 celebrates past cars like the 2000GT, pointing to a future Supra replacement. Live show pictures, video and details here 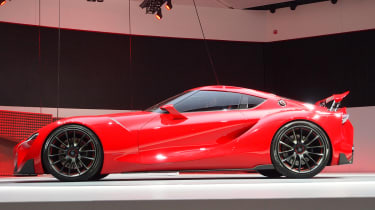 Toyota has revealed the new FT-1 concept car at the Detroit motor show, celebrating the company’s previous and iconic sportscars with a futuristic eye on the future – pointing at a possible Supra replacement.

FT-1 stands for ‘Future Toyota 1’, and the concept has been put together by the company’s California-based Calty design studio, which celebrates its 40th anniversary this year. The sleek coupe bodywork also features a McLaren P1-style rear wing, which extends and retracts depending on speed.

Designed as a pure and simple sportscar, the FT-1 features a front-engine rear-drive layout. Although there are currently few details on powertrain, we know the concept features a 'high-output' petrol engine with no mention of any electric or hybrid intervention.

Inside the cockpit, Toyota says the FT-1 is geared towards the driver. A ‘delta-shaped display zone’ is at the centre of attention, which is said to put the driver ‘at the heart of the action’. There’s also a Formula 1-style steering wheel, as well as a head-up display.

There’s no word on when or if we are likely to see a new Supra model, but this is the first inkling of hope for fast Toyota fans since the 2007 FT-HS concept.