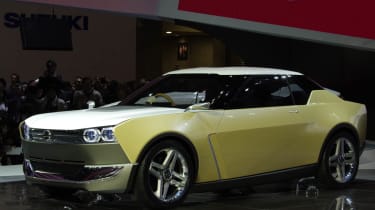 The possibility of a small, rear-wheel drive sports car from Nissan is now uncertain, according to a company official.

Nissan previewed its potential Toyota GT86 and Subaru BRZ rival in the form of the IDx Freeflow and Nismo concepts at the 2013 Tokyo Motor Show. But the firm has never officially confirmed the IDx concept would go into production, and Nissan is still struggling to make the numbers add up.

Nissan America vice president-product planning Pierre Loing told WardsAuto that it could be a struggle to build such a car at the price point Nissan, and the car's potential customers, would want. The problem, says Loing, is finding other cars to sit on the otherwise under-utilised platform. ‘To do a platform for 50,000 or 60,000 [units] a year – it’s not worth it,’ he said. While they’ve accrued lots of critical acclaim, modest sales of Toyota and Subaru's rear-drive offerings are unlikely to have convinced Nissan that such a project is viable.

The Juke is one reason the IDx (or a car like it) may be hard to justify - Loing already sees it as something of a GT86 and BRZ competitor, owing to its compact size and performance characteristics. Based on Nissan's B Platform, shared with models like the Micra and Note, it already meets Nissan's volume requirements.

Loing hasn't ruled out the possibility of a proper rear-drive coupe completely, but it's now looking less than feasible by the 2016 date proposed by Nissan Executive Vice President Andy Palmer, who told press in January that Nissan would ‘definitely’ build one of the IDx variants.