The CS-R3 is a rally-spec Toyota GT86, and it will make its debut at Rallye Deutschland 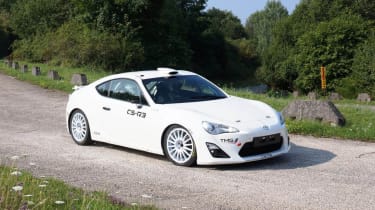 Toyota has announced details on its GT86 CS-R3 rally car, set to make its debut at next month's ADAC Rallye Deutschland.

The rally-prepared GT86 is the work of Toyota Motorsport (TMG) and will run in the FIA's R3 class. The class is open to production-derived vehicles between 1600 and 2000cc and replaces the old Group A and Group N classes.

These alterations should unlock greater performance than the standard car, which has a 0-60 time of 7.6 seconds and a 140mph top speed. A six-speed sequential transmission replaces the standard six-speed manual and like the road car, a limited-slip differential governs power to the rear wheels.

A shorter final drive ratio is employed, while TMG has developed both tarmac and gravel suspension kits with Reiger 3-way adjustable dampers. The former comes with a set of 7x17 inch OZ tarmac wheels, while the gravel setup rolls on 6x15 inch OZ alloys. Braking too varies depending on the surface: in tarmac spec, four-pot calipers grab 330mm discs up front - 300mm in gravel trim - and regulation two-pot calipers work on the 300mm rear discs.

Safety is enhanced with a homologated FIA R3-standard roll cage and a 75-litre fuel cell. All very serious then, but Toyota is pushing a ‘fun to drive, again’ message with the GT86, that competes in a class typically dominated by front-wheel drive vehicles – Renault Clios, Skoda Fabias and Citroën DS3s.

The GT86 won't be competing at the Rallye Deutschland, but will serve in a high-profile 'pathfinding' role at the hands of double women's world rally champion Isolde Holderied. As well as checking the safety of each stage before competitors storm though, Holderied will also evaluate and refine the CS-R3's capabilities prior to customer deliveries.

‘It’s important to say that the GT86 CS-R3 which Isolde will drive is not the finished article,’ explains TMG customer motorsport engineer Nico Ehlert. ‘But it gives a clear indication to our future customers that this project is progressing quickly.’

The 2014 Rallye Deutschland runs from August 21 to 24, covering 170 miles over 18 stages. The rally has been part of the World Rally Championship since 2002, and is best known for its tricky tarmac stages and the concrete 'hinkelstein' tank traps of its military training ground stages.