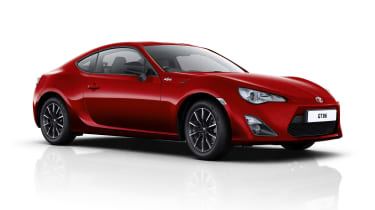 With Mazda’s new MX-5 set to start at £18,495 when it debuts at the Goodwood Festival of Speed in June, Toyota and Subaru will have even tougher competition for their own lightweight sports cars.

The former already slashed £2115 from the price of its GT86 last October, but now it’s getting even cheaper. Available to order now and with deliveries due in mid-July, an entry-level GT86 Primo now costs £22,700 - £300 cheaper than before.

Customers don’t lose much with the lower purchase price – alloy wheels drop from 17 inches in diameter to 16in, but the car retains its limited-slip differential, alloy pedals, air conditioning and other niceties.

Those with greater budgets to blow can still pay £27,495 for the range-topping Aero model. Now solely available with a six-speed manual gearbox, the Aero also wears a set of gloss black 18in alloy wheels and an optional GT86 Orange paint finish.

Performance is unchanged, with the same 197bhp boxer engine as before and resulting 7.6sec 0-62mph dash.  Top speed is 140mph.

Toyota also confirms a new GT86 special edition is on the way in the summer, though hasn’t yet revealed details.