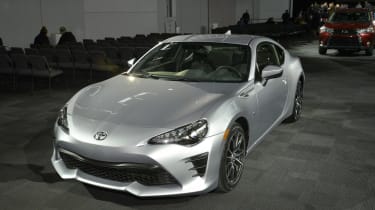 If you’re one of those people wishing the Toyota GT86 had considerably more power, you’re… out of luck, but the sports car still enjoys a host of revisions for its New York auto show debut.

Lightly updated for the 2017 model year, Toyota has made small changes to the GT86’s styling, as well as welcome quality improvements to the interior.

Styling updates start at the front, with a larger central air intake for a visually wider appearance. The bumper also features new fog light housings, while the headlights are all-LED units.

There are changes at the rear too, albeit rather more subtle. The keen-eyed will notice different rear light units, and the model shown also lacks the rear spoiler standard on all but entry-level Primo models in the UK. New alloy wheels sharpen up the car’s profile. 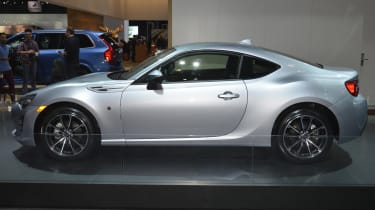 Changes inside are wider-ranging, aimed at improving interior ambience. There’s a new leather and Alcantara upholstery option and it’s now possible to trim the instrument panel in Alcantara too. You’ll also find it on the door trims, while there’s a new look to the steering wheel and contrasting silver stitching for the cloth seat option.

The engine remains largely unchanged, but the 2-litre flat-four's previous 197bhp and 151lb ft numbers have increased marginally to 202bhp and 156lb ft. Suspension tuning is different too, with revised damper tuning and different spring rates, for ‘easier control and increased agility’, according to Toyota.

As well as a general facelift, the changes marked the re-branding of the GT86 under the Toyota brand itself in New York. Previously sold in the United States as the Scion FR-S, Scion's recent disappearance from the market sees the car now join the Toyota marque, under which it's already sold throughout the rest of the world. The car will be known as the Toyota 86, in the US.

Pricing and full specification details are yet to be confirmed, though the small revisions mean there’s unlikely to be much difference from the existing £22,700 entry price. Find out more from the 2016 New York auto show by clicking on the link.