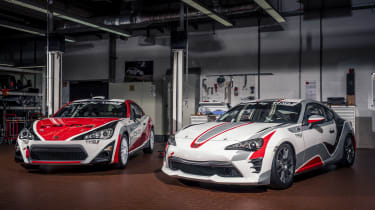 We’ve already seen examples of the Toyota GT86 in both circuit racing and rallying disciplines, but Toyota is extending its support for grassroots motorsport further with the launch of the Toyota Gazoo Racing Trophy.

Racing and rallying will be covered under the Gazoo Racing Trophy banner but there will be no specific series under either discipline. Instead, competitors will enter cars into eligible series across Europe – such as the VLN or the Nürburgring 24 Hours, or the FIA European Rally Championship – and score trophy points based on where they finish relative to the size of the grid and their competition.

A driver achieving victory in a class of five or more entrants in either a 24-hour race or a rally with more than 200km of special stages will achieve the maximum 75 points per event.

This actually means circuit racers will be able to compete on points with those taking part in rallies, and vice versa, with the final trophy standings determined by the ten best registered results from each competitor across the 2018 season.

Competitors will have to compete in a minimum of three events, and if drivers compete in more than ten events, then the best ten results will count towards the trophy. As long as a car is eligible for its intended series, there’s nothing to stop a competitor entering into more than one championship in order to improve their chances for the trophy.

Three cars will be eligible for the trophy – the Toyota Motorsport (TMG)-engineered GT86 CS-V3 and CS-Cup race cars (the latter costing €48,900 before tax), and the CS-R3 rally car (€84,000 in kit form, again before tax), which gives a broad spread of compatible series in which to compete.

It’s a novel idea and should add an extra dimension to those competing in the GT86 in 2018 – and it’s not difficult to imagine other manufacturers implementing a similar competition structure for their own customer race vehicles.