With the Le Mans 24 hours imminent Toyota has applied a collection of its historic motorsport liveries to three GT86 coupés. 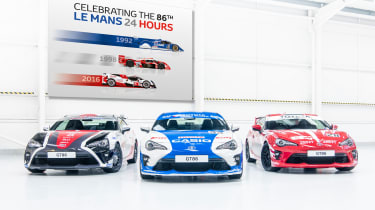 Toyota has revealed a trio of Le Mans-inspired Toyota GT86s ahead of the 86th Le Mans 24h. The cars honour the Japanese marque’s long participation in the famous endurance race, with each coupe wearing a livery once worn by a previous Toyota Le Mans entry.

A few years back Toyota unveiled six GT86s each clad in historical race colours as an homage to the brand’s previous motosport exploits, and this design exercise is no different. The three cars will make their debuts this coming weekend at the Circuit de la Sarthe.

The oldest of the liveries dates back to 1992, and the blue and white TS010 from the final days of Group C. Powered by a 3.5-litre V10 that produced up to 700bhp, the car was eclipsed in the race by Peugeot’s 905. More successful was the TS020, which claimed a class victory in 1999 at Le Mans. Commonly known as the Toyota GT1, this iconic red and white racer was powered by a twin-turbocharged 3.6-litre V8 engine. Most recent of the liveries is the one that echoes the TS050 Hybrid, which competed between 2016 and 2017 painted in a tri-tone colour scheme of red, white and grey.

In its quest for an authentic feel Toyota has fitted aftermarket wheels to each car that closely match the original wheels used by their racing inspirations. There are other modifications, too: all three cars sit 40mm on shorter springs and feature high rear wings in recognition of the high downforce employed by the endurance racers. Finally, a Milltek exhaust has been fitted for a suitably more raucous soundtrack.