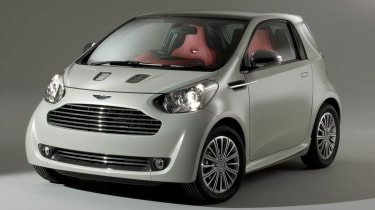 Aston Martin lovers look away – the brand’s most controversial car has become a reality. This is the Cygnet, a reclothed Toyota iQ that takes the British supercar firm sub-£20K and into the world of low emission city cars. The car was announced in the summer, but with just an image of a clay model alongside the news, it was relatively easy to stomach. Aston’s latest pictures of the car shot in a studio make the Cygnet very real. Of course, the car’s 113g/km of carbon emissions will do Aston’s range average the world of good. The DBS emits more than triple that. That sub 120g/km figure comes from the Cygnet’s predicted engine choice, the iQ’s range-topping 97bhp 1.3-litre. The Toyota covers 0-62mph in a dizzying 11.8sec and goes on to a 106mph top speed. It wouldn’t be a surprise if the Cygnet lags behind those figures, though, as its transformation from Japanese city car to Aston abomination has seen lashings of kit and trim thrown at it. All that leather and luxury inside will pump the kerb weight up a bit (the iQ’s is 930kg) but it’s the exterior that concerns us most: the full complement of current Aston design cues have been squeezed into the design, with a grafted-on grille, fake bonnet vents, 16in alloys, side vents and rear lights that ape the DB9 and Vantage. Even the door handles give a nod to modern Aston Martins. It’s dubbed a concept for now, with work ongoing into 2010, but the project appears too far in for Aston to change its mind now. Sales are set to begin by the end of next year, with order books initially open to existing Aston customers, but with general sale expected to follow. The annual sales target is 1000 to 2000 units. What do you think then? How can Aston Martin release such a car when the company’s tagline is ‘Power, Beauty and Soul’? Fire your views at the Forum… Follow evo’s Twitter or Facebook page for the latest car news