Westfield racer: looking back over the season

From a pile of parts to a class-winning race car, this is the story of how we went racing in a car we built ourselves. Roger Green looks back over a season's racing 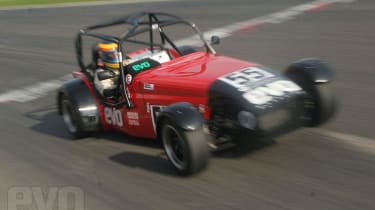 I can still hardly believe it myself. Who’d have thought back in March when Peter Tomalin and I enthusiastically set about a pile of parts with a socket set, rivet gun and copious mugs of coffee that we’d end up winning the inaugural Westfield Aerorace championship? Not us, that’s for sure.

Third place overall and first in class at the final round at Rockingham was a fitting end to a season that began on a bright but chilly morning in Harry Metcalfe’s garage. Peter and I had built a Westfield before – an XI – so we had some prior experience. Trouble was, this time we were up against a very tight schedule with the first race barely a couple of weeks away. We needed help and it arrived in the shape of Westfield’s own Russ Lee, whose knowledge and experience proved invaluable, enabling us to crack on with the build without constantly referring to the manual, saving us a huge amount of time.

There’s enormous satisfaction in seeing your car slowly take shape, counteracting the pain of grazed knuckles, bruised arms and swarf-pricked fingers, but nothing compares to the thrill of driving it for the first time. You feel so much more part of it than if you’d just bought one. Alas, there was time for only the briefest of shakedowns in the pouring rain before heading over to Snetterton for round one, where all this elation turned to crushing disappointment.

We were well off the pace of the older Class B cars, our standard 2-litre Zetec engine seemingly no match for their tuned 1.8-litre versions, and we finished a lowly 12th out of 17 cars. It turned out we had a faulty ECU that was only giving us 145bhp instead of the usual 167. The fix was simple and the improvement was dramatic: just two weeks later I qualified third overall and finished fourth in both races, which was more a relief than anything else – our amateur build hadn’t been the cause.

Westfield had hoped that this new car would be a little faster than the older model, thereby encouraging more drivers into the series, but it wasn’t that simple. I was able to finish on the podium on several occasions and even led for a while at Castle Combe, but the older cars always had the ultimate edge. This will change for next year as various changes are planned, but to be honest it didn’t really matter as long as I kept the other the Aeroracers behind! The racing itself was superb, always close but with the drivers giving each other just enough room to mean that contact was rare. My only bump all season was at Thruxton and that resulted in nothing more serious than a little bodywork damage. Our only non-finish occurred at Brands where a coolant hose worked loose, spraying Druids with the radiator’s contents and sending me gently into the tyre wall.

The Westfield series is grass-roots racing at its best. There are no teams, and if there are any problems everyone mucks in to help out, which builds friendships and in turn undoubtedly helps keep the racing clean. It’s one of the most cost-effective ways to go racing, brilliant fun and incredibly rewarding – especially if you build your racing car yourselves!   Thanks to Russ Lee and Simon Westwood for all their help and support throughout the season.