Roger Green and Peter Tomalin venture into the workshop with a pile of Westfield bits. They only have a month to get it all assembled... 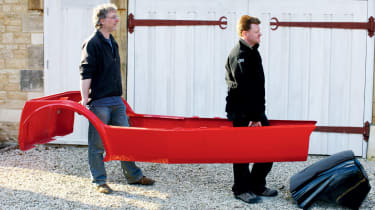 The old aches and pains are back. The grazed knuckles, the bruised forearms, the dull ache of stiff shoulders at the end of a long day, the swarf-jabbed fingernails that sting when soaked in a hot bath. It can all mean only one thing: we’re building another Westfield kit car.

Two winters ago we locked ourselves away for three months in a garage colder than a meat freezer to build a gorgeous little Westfield XI. While the outcome was stunning (we turned a rusty old heap of an MG Midget into a replica Lotus racer), being a bunch of ham-fisted, spanner-shy journalists, the amount of time and effort required for the project was simply gargantuan. Yet despite the cold, tiring days, the physical pain and the occasional frustrations, it was ultimately immensely satisfying. Driving on the road (and all the way to Le Mans!) in something we’d built ourselves, that handled so beautifully and drew so many admiring glances, was both flattering and fulfilling. Once gone we missed it so badly that Peter Tomalin and I resolved that one day we would build another, although there would be a proviso: it’d have to be during the summer.

Naturally it was a desperately drizzly, arctic mid-winter afternoon when Westfield sales and marketing manager Simon Westwood rang to say that the company was introducing a new model for its race series in 2008 and to ask if we’d be interested in building one and then competing in it. As we spoke, dark, brooding clouds scudded low across the sky outside my window, blown hard and fast by an icy-cold wind. The memory of the last build sent a chilling, bone-deep shiver right through me. Would we really want to do that again?

Of course we would. PT was surprisingly up for it in fact, and he had an idea: editorial director Metcalfe had recently built himself a new garage, complete with hoist, inspection pit and, most crucially, a heated floor. Perhaps I wouldn’t need the thermal ski-suit after all…

Had the kit been ready three months before the first race we’d have had plenty of time to get it built, tested and on the pace. Only we wouldn’t have three months, we’d have just one, and with the all-consuming demands of a magazine deadline to contend with as well, it was going to be seriously tough.

A scan through the schedules revealed that I could slot-in three days and Peter two, but with a build time estimated at around 70 hours the numbers didn’t add up. We needed an extra pair of hands, and preferably a pair that, unlike ours, were used to handling air-tools and ratchet spanners. We found them attached to the arms of Russ Lee, whose day job is in Westfield sub-assembly. Boss Westwood generously agreed to loan Russ to us not only for the build process but also to help out at race meetings. We had a technical safety-net; now we just needed to get on with turning the pile of component parts into a race car ready for its debut at Snetterton in four weeks’ time.

THE AERORACE ISN’T as beautiful as the XI – few things are – but even in component form it looks purposeful. The individual parts are well manufactured and of a high spec, especially when you consider that the kit costs just £15,995 all in. If you want to race a new car there can’t be many that are cheaper. And when I say new, I mean new. This time we won’t need a donor car and we won’t have to recondition parts. Instead we have a brand new 2-litre Ford Zetec motor, good for 167bhp apparently, which should make our 600kg car (including driver) fairly zip along.

Day one, and Russ is already laying out his tools as I crunch our Nissan Navara long-termer up Harry’s gravel drive. Behind him the chassis that I’d collected earlier from the Kingswinford factory sits on a pair of stands surrounded by numerous cardboard boxes and packets of fixings and fasteners, while the engine and gearbox dangle with anticipation on the brand new hoist. The chassis itself looks completely naked and I can’t help but feel that the Snetterton starting grid is a long way off. Still, it’s not cold, the sun’s out and the heated floor has kicked in. Luxury!

The AeroRace comes with a thick instruction manual, complete with helpful photographs, and chapter one begins with the aluminium panelling that gives the chassis additional strength and forms a compartment for the driver to sit in. It’s surprisingly time-consuming – each panel has to be clamped in place, drilled, cleaned, edges smothered in a generous squeeze of sealant, repositioned and, finally, riveted on – but it’s easy enough and by the end of the day the job’s practically complete.

I’m back again the next morning and Peter’s here too, along with photographer Dave Shepherd, and while moving everything around and posing for the snaps takes up more of our scarce time, we hope to make real progress by splitting into teams. Russ, who can obviously work without a manual, gets busy with the rear suspension, while Tommo and I, who can’t, pore over the diagrams for the front. Two years ago the manual for the XI barely ran to a dozen pages; you had to work it out as you went along, and I soon discovered that if there were two possible ways to fit something, I’d always pick the wrong one. Here, though, everything’s clear, and often the trickiest bit is finding the right- sized socket. We’re on a roll and by the end of the day the car is too – it’s got its wheels on.

Peter takes care of the next stage without me, so by the time I return to the garage a week or so later the wiring loom is in, the rear end has been completely finished, propshaft and driveshafts attached, the pedals are bolted in the footwell and the brake pipes have been bent and fitted. The next task is to attach the bodywork and install the engine. The technique for the former is similar to that for the ali panels, and using my new-found skills I’ve get the scuttle and dashboard fitted before lunch and the nose and bonnet soon after. For the first time there’s a car-like shape in front of us.

Getting the rolling chassis off the stands and onto the garage floor is a major landmark in the build. After being used to working on it at waist height, the AeroRace looks incredibly low – and very cool. With Russ’s guidance we have the engine and gearbox in the bay and connected to the propshaft within half an hour, giving us time to tackle the ancillaries before we load the car onto a trailer for Russ to take away for final finishing and checks back at Kingswinford.

ONE WEEK LATER AND, just a couple of days before the race deadline, our AeroRace is finished, spanner-checked and ready to go. The suspension has been aligned and given a base setting and I’ve booked an hour of testing at Snetterton before qualifying to fine-tune it. But before that I’m at the Bedford Autodrome for a shakedown test – a chance to bed everything in. Typically, just as I roll the red racer off the trailer the sky goes black and the heavens open spectacularly. The rain is falling so hard it hurts my face, but I can’t delay. I’ve only got a 30-minute slot, so it’s now or never.

I twist the cut-off switch, flick the ignition on and nervously poke the start button. After a brief pause the engine turns, catches and bursts into life. I slot the gearlever into first, release the clutch and… Wow! We’ve built ourselves a racing car! The feeling’s so good that I don’t even care that I’m already soaked – I’m driving our own AeroRace and it’s bloody brilliant!The time passes in a flash. The engine feels good, the brakes are strong, the steering is spot-on; even the handling balance seems about right. We’re ready.

Our short test session at Snetterton the next day goes well too, although in the dry the car’s balance has shifted from neutral to significant high-speed understeer. Stiffening the rear and softening the front helps, but we run out of time before we get even close to perfecting the set-up. What we really need is a full day of fettling, fiddling, adjusting and experimenting, but our ultra-tight schedule hasn’t given us that luxury. We’re not ready. And the next time we’re on track is for qualifying…

THE 20 MINUTES PASS in such a blur that it feels more like two. Getting a tow is crucial on Snetterton’s long straights but, try as I might, with the understeer issues I just can’t get one and I qualify tenth out of 17 runners. I’m disappointed – with more preparation time we would have been closer to front-running pace – but really I should be happy that we’ve achieved our objective of getting on the grid.

Sitting on the fifth row just before the race start, I take a moment to reflect that just a scant few weeks earlier, all we had was a collection of parts. Now, tightly strapped into the Cobra seat, I feel part of this complete machine. With the time and effort we’ve put in, the Westfield has become a part of me too. And even though he’s not driving, I reckon Peter feels it too – he’s not only given up his afternoon to come and cheer me on, he’s also dragged the rest of his family with him. I’d better not make a hash of it.

The red start-lights burn and fade, and in that instant 17 clutches are dumped as the field screams off towards the first corner. We’re racing. Within a lap a few things become very clear. We’re ace on the brakes – I can out-brake the cars around me and make up places – but we’re not quite so hot on the straights, where I lose all those hard-won places and more. Perhaps we needed to run that engine in a little more. The water temperature is also higher than I feel comfortable with, so I back off to ensure we at least finish, which we do, in 13th place.

A qualified success, then, but I know there’s much more to come. There’s a two-week gap until the next round, at Pembrey, which hopefully will be enough time to get everything sorted and put us among the front-runners. It’s a steep learning curve, but we’re up for it.