Roger Green tries out the latest Gumpert Apollo on track in France and interviews the man behind the machine, Roland Gumpert 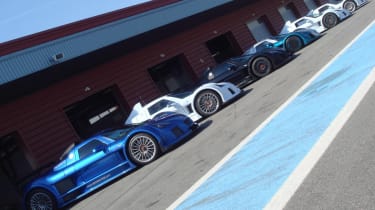 It was one of those no-brainer email invitations. ‘Would you like to join us in France for an exclusive, Gumpert Apollo trackday?’ Er, yes I would thank you very much. It as to be the first time such a clutch of Apollos would be gathered together and just to add to the fun the new Speed would be there too, fresh from the Geneva motorshow for a proper nose around and the chance to chat to the man behind these road-going racers, Roland Gumpert.

The invite came from Andrew Ward of the UK’s Gumpert importer, Autograph Cars of Burnley. They would be bringing along their metallic blue demonstrator, the car that set our Bedford Autodrome lap record and topped the charts on the BBC’s Top Gear show. Despite that success, Ward was disappointed by the way the Apollo was continually described as ugly by the TG team and I can see his point. Sure, it’s different from all other supercars, it’s aggressive and it makes no excuse for its form being created primarily as a consequence function, but I like that. It’s unashamedly an engineer's car, shunning unnecessary bling and over-styling, and for me that makes it cool. This is one supercar that has no problem backing up the talk with ultra fast walk.

The pitlane line-up as we arrived at Circuit De Bresse (about 60 miles south of Dijon) was incredible it looked like a weapons-grade race-car gathering, but all of these were road cars. Sitting in the middle was the new Speed with softened and smoothed lines to reduce drag and increase its V-max to 224mph. You can see how Roland Gumpert and his team have achieved this by checking out the Gumpert video video where he talks us around the car. It’s a shame it wasn’t quite ready for a run, but despite having a 100 horsepower advantage over the 700bhp regulars I wonder whether it would be quicker around the track we’re playing on. The lower drag figure has come at a price, the Speed has less downforce and Circuit De Bresse is, in the main, tight and twisty with only a couple of opportunities each lap for full power to be deployed for more than a few seconds.

I’ve briefly driven this Apollo before at the Bedford Autodrome, a single lap was all I managed before my run was curtailed when the noise nannies stepped in. We won’t have that problem today, so it’ll be great to finally get a proper handle on this record breaker. The gullwing door makes access easy, particularly if you’ve whipped the removable steering wheel off first. The seat is fixed; in fact it’s not a seat in the conventional sense, more a fixed shell that can be adjusted for comfort by adding or removing suede pads. Both the pedalbox and the wheel are adjustable so you quickly find a comfortable position. Or at least I did, but I have a feeling that those on the far side of six-foot may have an issue as it’s compact inside. Forgive me for name dropping but it does feel very much like a modern interpretation of the Porsche 962 that I raced last year...

The engine being turbocharged and delivering 700bhp is not dissimilar either, although this one wears Audi badging, as this is effectively the 4.2-litre, 90-degree V8 found in the RS6 – albeit heavily modified and fitted with lightweight internals. Prod the starter and it wakes with a familiar deep bassy backbeat and after waiting for the temperatures to come up I’m ready to go.

The gearbox is sequential but it always requires the use of the clutch and a manly shove to swap cogs but you quickly hit a rhythm with it. The Apollo runs with a fully adjustable traction control system so it makes sense to rein in the slip for the first few laps as I learn the track and the car. Circuit De Bresse is tight, folding back in on itself as if the aim was to produce the longest layout possible for a given area of land, it’s the kind of track that would be ideal in a Caterham, but perhaps one you wouldn’t choose to show off the talents of a mega-power sportscar. But perhaps that’s exactly why they’ve done it because the Apollo is surprisingly agile, it turns-in cleanly and you can trail brake with no fear of backing into the turn. I had feared that traction might be an issue out of the second gear hairpins, but not a bit of it. Of course it will slide as the boost rushes in but it’s very predictable and manageable even with the traction off.

There are no true high speed turns here but if the medium speed stuff is anything to go by the main limiting factor in cornering speed would be the driver’s bottle, overall grip levels are very strong and it doesn’t take many laps to understand how this car has set so many records. Over lunch Roland reveals that Gumpert will be making an attempt on the Nurburgring lap record and if previous experience is anything to go by the history book writers should start sharpening their pencils.

To see the action for yourself check out the Gumpert track action video from the day.