VW Cup at Rockingham in Polo 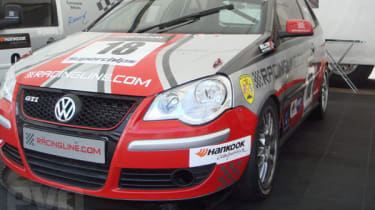 Following on from John Barker’s 24 hour Nurburgring adventure it’s now Roger Green’s turn to clamber into a VW race car. This time it’s a Polo and the venue is the slightly less leafy Rockingham track just outside Corby, where he’ll be joining the VW Cup and hoping for a better result than the opening rounds at Oulton Park (watch the video here). Keep up to date with his progress here as he reports regularly from the circuit, or alternatively pop along and give him a wave. The races are part of the British F3/GT meeting so action aplenty is guaranteed, for more information click here.

Sunday 16.24: Race TwoWhat a hoot! Got a blinder of a start and shot to sixth into the first corner from 13th on the grid. For the next few laps car 18 became the widest Polo in the world as I did my best to hold back the huge pack. Eventually a few elbowed their way past as I began to struggle with a gearbox that began making some odd grinding noises. It was fourth gear that gave out in the end but we gamely plugged on and finished where we started in 13th.

I’ve got to say this VW racing is a huge laugh and I reckon everyone should give it go. If you don’t believe me watch out for the video that will appear here in a day or two.

Congratulations to Steve Chaplin and Joe Fulbrook who finished 1st and second in both races and a big thank you to all the guys and girls at Racingline for working so hard and putting on such a great show.

Sunday 13.04: Race OneWell, we managed to keep the hose attached and get to the finish! And made up a few places too, bringing the little Polo home in 13th. The car’s still not optimised, the brakes are a tad inconsistent and the power dropped off as it got hot but we’re certainly heading in the right direction. It’s brilliant fun, the VW Cup, the varied grid means you’re mixing it with a whole variety of different cars. In that race I was swapping places with a couple of Golfs, a Scirroco, a Beetle and the Kids favourite, the huge Caddy van.

It’s boiling here, so it’s on with the suntan lotion as we watch the GT racing before our second race later this afternoon.

Saturday 14.22: QualifyingMotorsport has a nasty habit of kicking you in the teeth once in a while. Barely thirty seconds into qualifying the turbo hose fell off and once the lads at Racingline had re-attached it, the thing popped off again a couple of laps later. The net result is that we’re down in 18th place on a grid of 24. Well at least it should be pretty exciting from there tomorrow.

Friday 1500: PracticeIt’s been like driving around in a steam room this afternoon, the temperatures were so hot on the track in the first session that tyre pressures climbed to 45psi in the first few laps. A smoke effect was provided by a gentle weeping oil breather that filled the cabin with a smelly fog every time a few drops landed on the turbo pipe of our little Polo race car.

We’ve made progress though; this is an old car that hasn’t seen much action for quite a while so we’re still discovering its little foibles. We softened off the rear suspension for the second of the half-hour session and that stopped the rear from hopping around all over the place and we’re still perfecting the brake set up. But that’s it for today, tomorrow afternoon we’ll be straight into qualifying. If you can make it over to Rockingham for the weekend pop over and say hello, there’s plenty of action all weekend as supporting us in the VW Cup are the British GT and F3 championships...