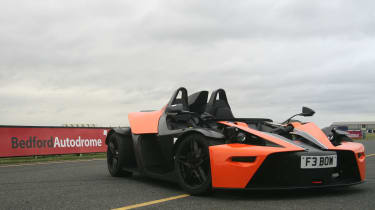 Over the last ten years I’ve probably attended over 200 trackdays and run around 80, but the Carlin Driver Development Day was ground-breaking – this was a trackday with timing! As regular trackday drivers will be aware, timing is normally not just frowned upon, it’s banned and anyone caught with a mobile phone on the pit-wall runs the risk of being unceremoniously thrown out. It’s all to do with corporate insurance; if you add timing it is perceived as a competitive event and therefore the organisers indemnity is null and void.

So how have Carlin circumvented the rules? Simple really, they ran a limited-numbers event at Bedford Autodrome which, because it’s not an MSA-sanctioned circuit, is not bound by the same restrictions. The current British F3 champions have outstanding race pedigree and are now service partners for KTM, so it was perhaps unsurprising to find the majority of the 17 cars taking part were X-Bows of various specifications. TSL provided transponders for everyone and a bank of screens were set up in the pits for the drivers to check on their progress.

Also on hand where Carlin’s crack team of mechanics and their pro drivers, who included Aaron Scott, who drives a Viper in the British GT championsip, Oliver Turvey, who recently won the Monaco round of the World Series by Renault championship and Daniel Ricciardo, riding high at the top of the British F3 standings and a cert for a future F1 seat. Receiving instruction from some of the leading lights in international motorsport is a real treat and for just sixty quid on top of the £285 fee for the evening you could book them exclusively for half an hour, which seems like very reasonable value to me.

I was loaned team boss Trevor Carlin’s X-Bow for the evening, which benefited from having been set up the team, and was markedly more positive on track than the standard road settings. After a briefing, track time kicked off at 17:30. Strong emphasis was made of the fact that the timing was there to help aid progress rather than to encourage racing. With a variety of different cars out there, some drivers would hold a definite advantage over others, and if you caught another car on a hot lap then we were advised to back off and try again rather than lay everything on the line with a desperate out-braking move. Driving standards were to be monitored at all times by the marshals and there would be no acceptable excuses for transgressing.

To be honest the team needn’t have worried, the standard of driving was excellent and there was plenty of space on the 2.7-mile circuit (we were using the ‘South-west’ version), and was great to be able to come in after a run and check on how you were progressing. It worked for novices too - who were armed with crosses on the back of their cars – as improvements in driving were not only felt at the wheel but also demonstrated against the clock. The idea takes trackday to a higher level and offers the more experienced driver, who may not want to go racing, a new challenge. Everyone at the inaugural event praised the format and all promised to be back for more. You can’t argue with that.

For more information on other events this summer log on to www.carlin.co.uk