Often the forgotten form of motorsport, but it shouldn’t be. Roger Green tackles Harewood in a Fiat Grande Punto to explain all 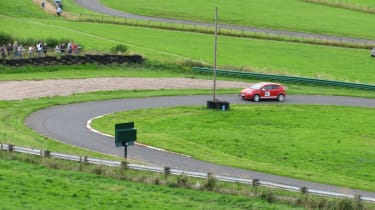 Hillclimbing is a discipline often over-looked by trackday drivers and racers alike, but it shouldn’t be. The focus, skill and technique required to be competitive is at least a match for any other form of motosport and it has the advantage of being cheap (around £100 per event) and available for any form of car from your standard road car through to single-seater specials. I hadn’t taken part in a UK hillclimb since 1996, so when an invitation from Fiat to take part in one at Harewood I jumped at the chance. Located just a few miles from Harrogate, Harewood is a venue I’d heard a lot about but never visited before. But I should have, the setting for the 0.9-mile course is just about perfect. Perched on the side of valley, the view from the top is incredible. Not only can you see the full course out in front of you - complete with the farm buildings which you drive between - but you have a widescreen view that stretches out for miles in either direction, with red kites circling majestically in the thermals above. Our competition cars were Grande Punto Abarth Essesses and my main competitor was to be fellow scribe and respected and rapid historic racer, Tony Dron, who writes for our sister title, Octane. Actually that’s not quite true, the biggest competitor in hill climbing is yourself. It’s just you, the hill and the stopwatch, and if you can improve through the day then that should be your greatest aim. If you don’t believe me, take Simon Taylor’s word for it. He’s a man who travels the world lunching with the legends of motorsport, and yet he’s here too, even though he’s had to drive his HWM Chevrolet all the way from Chiswick in the rain to compete in a class of one.    The Puntos were completely standard, even the handbooks were still in the door pockets, and while that meant we were unlikely to match the stripped out specials that were also in our class, it didn’t mean we couldn’t aim to drive them flat out up the twisting course. Before the event kicked off I decided to walk the length of it. The track has a smooth, high quality surface, but it’s far narrower than I’m used to, being effectively a single track lane. Surprisingly for something referred to as a climb, it actually falls downhill after the first turn, before it twists and turns through a tricky complex. All but one of the corners are taken in second gear, but technique is all important and any small mistake is amplified, particularly in the final section past the farmhouse, which is steeply uphill. The first run is something of an eye-opener, and it proved just how important every fraction of second is important here. The Punto’s little 1368cc delivers 180bhp and 200lb ft of torque, thanks to its turbo-charger, and it comes onto boost with a punch hard enough to overwhelm the front tyres. Off the line I dial in a few too many revs and light them up.  At Harewood each run is broken down into six sections to give you detailed split times and what it showed me is that the two tenths of a second I lost to Tony at the start were still lost at the end. I also discovered the Essesse works well around the tight twists and turns, the brakes are sharp and strong, it turns in well – with a tad of oversteer if you trail brake – and on ‘Sport Boost’ you get a decent amount of feel through the well-weighted wheel. In between runs there’s plenty of time to wander around the paddock or watch other runners take on the hill. Or of course you can mentally prepare yourself for the next go. You get two practice runs in the morning and at least two in the afternoon. If everything runs smoothly the organisers try to squeeze in a third before the curfew falls at 6pm. You have to learn quickly and recognize what feels right and what doesn’t and it’s these analysing skills that will transfer to other forms of motorsport, potentially giving you an edge. After the first timed run I’d reversed the deficit and led Tony by 0.2 seconds, and although I went faster again on the second timed run Tony was closing the gap. He was now just 0.1 seconds slower. This was proper competition, but in the right spirit. There was tension there for sure, with some gentle ribbing and a few wind-ups thrown in, but we weren’t going to fall out, this was fun. I went first, Tony setting off 30 seconds behind me and for the first half of the course everything was going well. And then the pressure got to me and I missed a gear. I couldn’t beat my previous best. Tony could though and did, he beat me by little more than the blink of an eye. He got it right, I didn’t and that’s the essence of hill climbing. On a race track there would have been another lap to make amends, here there was no such luxury.  Was I disappointed? Not at all, I’d had a great day, learnt a great deal and enjoyed myself more than should be possible in a standard road car. I’ll definitely be back for more.