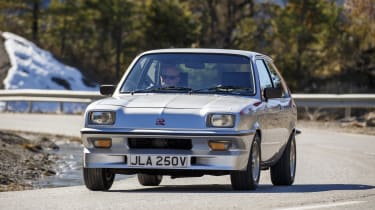 Through alpine curves, the Chevette drives much like a front-wheel drive hatch, albeit one lacking in torque steer. Understeer is the dominant characteristic, and the balance feels front-led. That might change when really exploring the car’s limits – or on a wet road – but Tony Pond and Pentti Airikkala impressions would require plenty of commitment.

Confident in a healthy surfeit of grip over power, it becomes natural to carry a little more speed into corners and get on the throttle earlier than you might in something spikier. The steering is quick to respond and weights up early, the effort required varying in proportion to load.

The brakes need a little more care – tiny discs up front and something called ‘drums’ on the rear axle – but the solid pedal provides reassurance and they’re easy to modulate.  The endearing squeak they generate into downhill hairpins as they warm up is simply part of the charm. 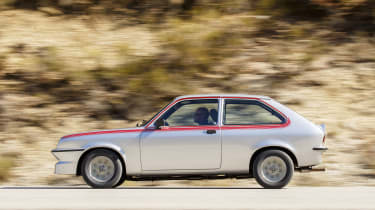 Today, the hot hatch power race has spiraled out of control, but at the time only Chrysler’s Lotus Sunbeam could touch the HS for performance, with its 150bhp Lotus twin-cam.

The Chevette never quite matched the Lotus for kudos, and never touched Ford’s success on the world’s rally stages either, but with Pond and Airikkala at the wheel, it still won the British Opel Rally Championship in 1979 and took the manufacturer’s title in 1981.

If there’s one realm in which the Vauxhall comfortably beats its Ford rival, it’s affordability. While an Escort RS2000 now commands upwards of £15,000 – and Mexicos more than that – it’s still possible to find HS Chevettes at four-figure sums. As homologation specials go, and on the evidence of a drive on some of France’s greatest roads, that’s something of a bargain.