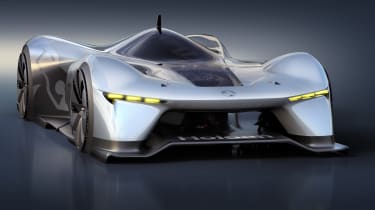 Holden has revealed a new ‘virtual concept’ celebrating the 50-year anniversary since its first win at Bathurst – Australia’s most illustrious race. Called the Time Attack Concept, it’s been designed to envision a future time attack racer that would complete one very fast lap around Mount Panorama.

The concept is a sleek single-seater based around a complex carbonfibre web chassis. Unlike most of the race cars finding their way around Bathurst, the Time Attack Concept is electrically driven via motors on each axle. The motors are fed by a battery pack mounted behind the driver compartment. The concept looks like something between a Le Mans endurance racer and F1 car, but with much sleeker active aero that only reveals itself when required.

> Click here for our review of the VXR8 GTS-R

This is, of course, little more than a design concept, flexing Holden’s Australian-based design team now that local manufacturing has drawn to a close after the demise of the previous-generation Commodore.

Despite this, the V8 Supercar racing series has gone on with Holden’s new Commodore, which is little more than a re-branded Vauxhall Insignia. The racing car is anything but, however, as it uses a control chassis and powertrain combining rear-drive and a 5-litre V8 engine. As a result, it’s quite hilarious seeing Insignias being slid around the racing series with a brutish V8 sound being emitted from the side exhaust pipes, but we’re not complaining.

Arch-rival Ford has had an even more acute issue, not having replaced its Falcon with a direct replacement, and as such not having anything to replace the V8 Supercars racer. But, good news is on the horizon for the blue oval, as Ford has teased its possible use of the Mustang bodyshell in the series, giving the blue oval real factory support once again.

Both the Holden concept and Ford’s V8 Supercars racer have come on the eve of this year’s Bathurst 1000 race, due to take place this weekend. Much like the Le Mans 24hr, the Bathurst 1000 sits as the premier event within the V8 Supercars series, itself a semi-endurance race lasting between six and seven hours. Much like Circuit de la Sarthe, Mount Panorama is also a public road when not in use, consisting of 3.7miles of steep mountainous sections offset with long straight runs up and then back down the mountain. The circuit has an average speed of over 100mph, which is shocking when you see that half the loop is slow second gear.

The concept is just one more sign that Australia’s love of racing is far from over now its local manufacturing has closed shop. 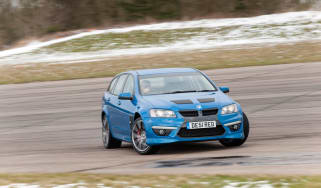