The production version of the Vauxhall Adam S has been shown at the 2014 Paris motor show. Video and details here 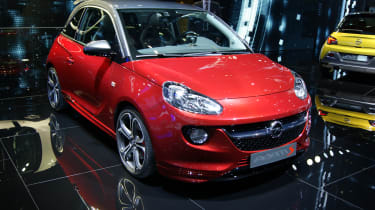 The Vauxhall Adam has cried out for an engine worthy of its striking appearance but the Adam S, making its debut at the upcoming Paris Motor Show, should rectify that.

Vauxhall has strapped a turbocharger to its 1.4-litre Ecotec engine for a 148bhp output, 50hp more than the most potent version of the naturally-aspirated 1.4.

Torque too leaps by 70% and a six-speed gearbox should help make best use of the extra grunt, enough to put it on par with frisky rivals like the Fiat 500 Abarth and the new three-cylinder MINI Cooper.

It’s enough to shave three whole seconds from the standard Adam 1.4’s 0-62mph dash, but on paper at least it still lags both its fashionista rivals – a 0-62mph time of 8.5 seconds and top speed of 124mph are a around half a second shy and a few miles per hour behind the Abarth and MINI in each benchmark.

Economy is similar to that of the 500 Abarth at 44.1mpg, but falls behind the MINI’s impressive 62.8mpg combined figure. The Adam’s revised unit does meet Euro 6 emissions standards though, and features stop-start tech for further fuel savings – so it shouldn’t cost too much to run.

Inside, three Adam S-specific seat options join the range – including the obligatory leather-faced Recaro Performance pews. Further Red ‘n’ Roll colour options are there for the taking, including red and black leather finishes for the steering wheel, gearknob and handbrake lever and red and white lighting for the instruments and door cards.

IntelliLink connectivity allows drivers to hook up their Android or Apple iOS smartphones via the 7-inch touchscreen and for the latter, Siri eyes-free voice control. No pricing has yet been announced, but that can be expected by the time order books open in January 2015.