Vauxhall announces prices and specs for its fastest, most powerful production Astra hot hatch yet 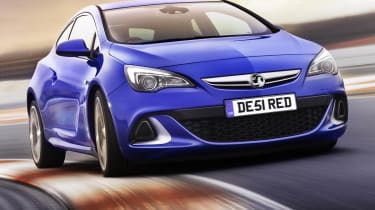 Vauxhall has firmed up the specs and details of its new Astra VXR, as well as releasing a promotional video. The most potent Astra ever will also be the most powerful hot hatchback on the market when UK sales begin in July. It won’t be cheap, prices starting at £26,995. There’s a lot of tech under the skin, though. With the previous, 237bhp VXR infamous for its torque-steer, much has been done to avoid the same problems in its all-new 276bhp successor. There’s a motorsport-derived Drexler limited-slip diff operating on the front axle, and unlike its hot hatch rivals, the Astra’s is a proper mechanical plate differential, rather than an electronic item. The HiPerStrut front suspension setup, successful in the Insignia VXR, is tweaked for the Astra, making steering independent from suspension on the front Macpherson struts to cut torque steer and improve front-end grip. A FlexRide drive select mode comes as standard, with Normal, Sport and VXR modes boasting suitably varying suspension stiffness, throttle sharpness and steering weight. The stability control boasts three strength levels, one of which is completely off. A co-cast brake kit combines steel and aluminium, cutting weight compared to a standard setup without compromising heat resistance. Power comes from a 2-litre turbocharged four-cylinder petrol engine, with 276bhp and 295lb ft peaks resulting in a 5.9sec 0-60mph time and a 155mph top speed. Those latter figures nigh on match those of the VXR’s toughest foes, the Renaultsport Megane 265 and VW Scirocco R. Your £27K buys plenty of tech, then, and there’s also 19in wheels as standard (with forged alloy 20s, which are actually lighter than the 19s, an option). The interior also gets a pair of Recaro-like sports seats, which use composite materials in order to weigh 45 per cent less than regular chairs. We’ll find out what the all-new Vauxhall Astra VXR is like to drive in June.