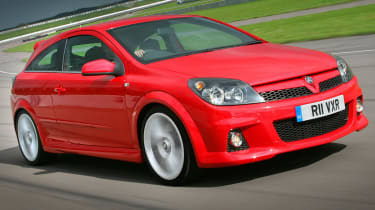 The Vauxhall Astra VXR has been given an almighty boost courtesy of Triple Eight Engineering, the experts behind Fabrizio Giovanardi’s Vectra VXR that took him to 2008 BTCC Drivers’ Championship glory. They have developed various tweaks for the Astra that are available at Vauxhall dealers, and fitted in a similar manner to Mountune’s Ford Fiesta and Focus tuning kits. Triple Eight’s work on the VXR outstrips the STs, though. For starters, an £850 Remus exhaust offers a rawer sound and a 20bhp-boost in power, while the ECU can be adapted to free an extra 48bhp from the Astra’s 2-litre engine. That brings the total power on-tap to a slightly staggering 305bhp. Never mind the Mountune ST, that outdoes the projected power of the Focus RS. To reign-in the extra shove, there’s a Triple Eight wheel and tyre package. Bespoke 18in alloys wrapped in 235/40 Toyo Proxy rubber will set you back £1380. There’s also a VX Racing brake kit, boasting four-pot front calipers and larger 343mm x 26mm front discs,vand an Eibach suspension kit that allows the ride-height to be lowered by up to 15mm. Sounds exciting, but will it just torque-steer you into the handiest tree, or is 305bhp just what any half-decent Astra needs? Wing your way to the forum and let us know.