Vauxhall's most powerful Astra ever has been unveiled at the Geneva motor show. Meet the 276bhp VXR, ready to tackle the new Ford Focus ST and Citroen DS4 Racing 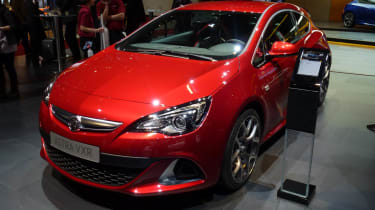 Vauxhall has used the Geneva motor show to unveil its all-new Astra VXR. And with 276bhp, it’s the most powerful Astra ever. Based on the curvy Astra GTC three-door, the new VXR gets its power from a turbocharged 2.0-litre direct-injection four-pot.

The VXR will remain front wheel drive, but with so much power, Vauxhall is using a new mechanical limited slip differential, in conjunction with HiPerStrut technology from the GTC. As with the cooking Astras, the FlexRide system features a sport button but also adds a new 'VXR' button. Pressing either will stiffen the ride and sharpen the throttle response to varying degrees.

The Astra will face stiff competition - also at Geneva 2012 is the all-new Ford Focus ST and Citroen's 256bhp DS4 Racing. We look forward to finding out how the new VXR stacks up.