Vauxhall has unveiled plans to launch a new mid-sized convertible, called the Cascada 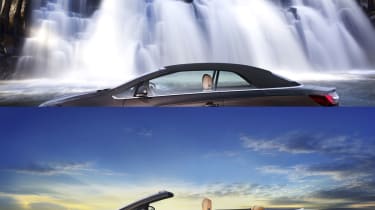 Vauxhall has partially revealed a new mid-sized soft-top cabriolet model, which the company has named Cascada. It's a mid-size convertible, sitting between the Astra and Insignia in terms of overall length.

Vauxhall, following an ever increasing trend in the industry, has revealed the two teaser images. The images show that the car is fitted with a fabric hood, unlike the previous Astra TinTop's folding hard top, which this model will replace. According to Vauxhall, the hood can be retracted at speeds of up to 30mph.

At 4.7m long, the Cascada is 70mm longer than the Audi A5, and although various convertible Cavaliers were built by coachbuilders in the 1970s and '80s, the company claims this will be the largest open top car Vauxhall has built since the 1926 OE-type 30-98.

The Cascada won't be at the Paris motor show though. The company will be keeping the main focus on the recently revealed Adam, however it is expected to be fully revealed before the end of the year