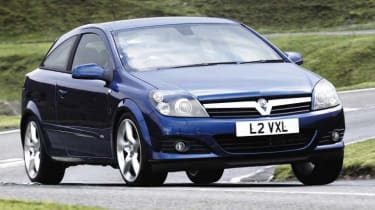 So this is the car that Jeremy Clarkson gambled - and lost - his hair against. The curly one bet his barnet that the radical three-door Astra concept shown at the 2003 Geneva show wouldn't make production. The very similar Sport Hatch proved him wrong - and the video of him munching his way through his freshly-snipped locks, in an omelette, has achieved cult status in both Luton and Russelsheim. Not that the Sport Hatch name is particularly original (or, for that matter, grammatical) - Renault already has a Megane SH. But GM's decision to offer a completely different body for the three-door Astra, almost entirely unrelated to the existing five-door, does look set to catch VW and Ford off guard. The logic is simple - sales of three-door family-sized hatchbacks have been falling for years as the aspirational buyers who used to go for them migrate into niche models. The Sport Hatch's coupe-inspired styling and more aggressive visual purpose are meant to appeal to them. Externally the Sport Hatch is almost completely different to the five-door Astra. The only shared components are the headlights, bonnet, door handles and mirrors. The roofline is 35mm lower, the glasshouse is aggressively raked and shaped, muscular contours predominate at the rear. It looks good, and what's more, practicality is hardly diminished, as the Sport Hatch shares the five-door's boot capacity. In the cabin it's far less radical - the familiar Astra dashboard and decent driving position, although with poor rearward visibility through the small rear screen and past the chunky C-pillars. Later in the year the Sport Hatch also gains the £850 option of what's described as a 'panoramic windscreen', which is like a conventional windscreen, only bigger - taking an uninterrupted sweep of glass to a line between the B-pillars. Mechanically the Sport Hatch is pure Astra, meaning torsion beam rear suspension and a comprehensive range of engines. There are four petrol and three diesels available from launch, with the higher powered 250bhp 2-litre Turbo VXR set to follow later in the year. Of the initial crop it's the downtuned 170bhp 2-litre turbo petrol and the 1.9-litre 150bhp common-rail CDTi diesel that offer the most evocentric cars in the range. First up, the diesel - and a chance to tackle the manufacturer's favourite winter launch route from San Pedro Del Alcantara to Ronda in the deep south of Spain. As always, its super-smooth Euro-funded tarmac and sweeping turns aren't particularly indicative of how a car will deal with a pockmarked British back road. Compared with the existing Astra, the Sport Hatch's ride height has dropped by 10mm, and all versions ride on the firmer sports suspension settings that we've already seen on the five-door SRi. The optional IDS (Intelligent Driving System) also includes electronically controlled dampers and the presence of a 'Sport' button on the dashboard to firm up same, sharpen the throttle map and add some weight to the electro-hydraulic steering assistance. Dynamically, it's upper-decent, high grip levels fading to eventual understeer (which the stability control tries aggressively to reduce.) With ESP turned off the Sport Hatch remains a benign, friendly device - although the numb-feeling steering can't muster the sort of feedback you'd expect to find in a hot-ish hatch. The 150bhp Fiat-sourced diesel engine is rather good, though. Thrummy at idle and prone to sending vibrations into the cabin at certain harmonics, but possessing a serious spread of mid-range torque that it's fun getting acquainted with. GM couldn't provide us with a British-spec 2-litre turbo petrol engine for comparison purposes - only the more powerful 200bhp version was available to drive (which won't come here until at least after the VXR has gone on sale, to 'prevent confusion'). But it's pretty close to the slightly turned-down 170bhp unit - deep-chested and enthusiastic, delivering linear urge from 1500rpm to the 6500rpm red line, overlaid by a nice, whooshy induction soundtrack. A reminder that, for all the plaudits heaped on the Ford Focus's chassis, it's the Astra that possesses the better engines. It's good looking, it's sensible, but - as it stands at the moment - the Sport Hatch just isn't particularly sporty. That's something the keenly awaited VXR will, we hope, put right.