The best mid-size CC yet? 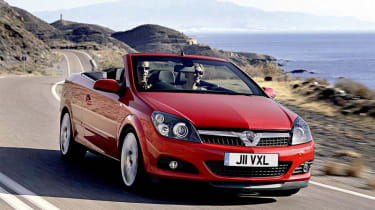 Not another coupe-cabriolet! But the Vauxhall Astra TwinTop is cleverer than its mid-size rivals because it has a three-piece roof like Volvo's C70. It's a good-looking, curvy roof, too, with - says Vauxhall - shades of the old Calibra. Three pieces means a stubby tail, credible proportions and decent rear-seat room, but the snag is in the stacking of those three pieces in the boot after the roof has done its folding acrobatics. Before you can get at luggage you have to press a button to raise the stack, and it's annoyingly slow. Forget the 1.6 engine, obviously. The 140bhp 1.8 isn't up to shifting the TwinTop's ton and a half, either. Equal top billing, pricewise, goes to the 150bhp 1.9 CDTi and - our clear choice - the 200bhp 2.0 Turbo. It's a gutsy, smooth-revving engine and gives a drive focused enough to entertain. There's some windscreen shake on lumpy roads but otherwise the TwinTop handles well, with credible steering and more agility than expected. It's not a sports car, but so far it's the best of the compact CCs. Next: Ford's Focus CC and Volkswagen's Eos, both with mere two-piece roofs. Let battle continue.