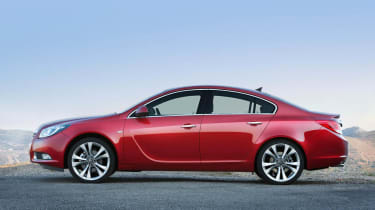 3
Vauxhall has introduced a new twin-turbocharged diesel engine to top the Insignia’s oil-burning range. With 192bhp and 295lb ft on tap, the new motor has 35bhp and 37lb ft more than the single-turbo 2-litre CDTi it’s based on, and the company claims it can deliver an 8.2-sec 0-62mph time.
The new engine uses sequential turbos to give a fuller torque curve. A smaller turbo spins quickly at low engine speeds, equating to 258lb ft from just 1500rpm, and then both it and a larger turbine work together throughout the mid range. At the top end, the bigger turbo takes over and works alone from 3000rpm onwards.

Subscribe today to have every issue of evo delivered straight to you. You'll SAVE 39% on the shop price, and get evo for its original cover price for a whole year!
Subscribe now
Vauxhall claims there’s no cost to economy, with an official 57.6mpg on the combined cycle – slightly better than the standard 158bhp 2-litre CDTi. Flexride adaptive damping is standard on all Insignias fitted with the new engine, with a sport button to vary throttle, steering and damper systems. Buyers will also get to choose between front- and four-wheel drive versions, with all-paw versions getting torque vectoring and an electronically controlled limited slip differential at the back.
Prices range from £27,120 to £33,320, with four wheel-drive versions costing between £1600 and £2500 more than front-drivers.
Advertisement
Advertisement - Article continues below
Follow us on TwitterFollow us on FacebookEmail us
Advertisement
Advertisement