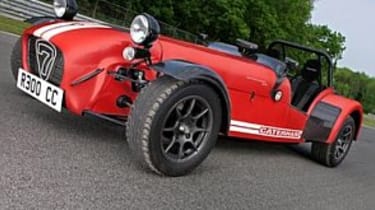 Caterham racing has for years been admired for its fast, close racing, where the winner is never known until the final corner of the final lap. It has spawned numerous championships from the novice-friendly Academy series, through to Graduates, Roadsports and the frontline R300 and R400 championships. Roger Green joined the R300 field as they made a pilgrimage to Spa Francorchamps a couple of weeks after the Belgium Grand Prix.

The R300 is powered by a 175bhp version of the Duratec, an engine that appears virtually unburstable. The first thirty-minute race of two was one by Jonny Leroux in a car he uses for trackdays and has been run for 170 hours without a rebuild.