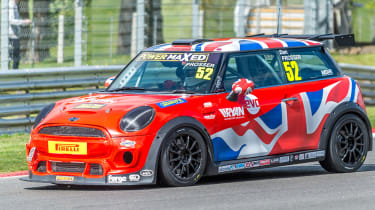 Last month I was jammy enough to compete in the second round of the 2015 Power Maxed Mini Challenge at Brands Hatch. It was my second ever race weekend – my first sprint race experience – and it might well have been the most fun I’ve had in a car. Here’s what I learned during an unforgettable weekend.

1. The new F56 Mini Challenge is a little touring car. With around 270bhp, a six-speed Quaife sequential gearbox, locking differential, aero, adjustable brake bias and slick tyres the new-for-2015 car really is a mini touring car. People who are actually qualified to comment on such things have said so, too, including series regulars who have raced in the British Touring Car Championship and, in one case, the World Touring Car Championship.

2. The Brands Hatch Grand Prix circuit is something else. The shorter Indy layout at Brands Hatch is in use week in, week out, but the longer Grand Prix circuit can only be used eight days a year due to noise restrictions. It was a total privilege to compete on the full-length configuration – the section between Surtees and Clearways, where it rejoins the main straight, is probably the best 1.2 miles of race track in the UK. It’s fast and flowing, the gradient changes are huge and the blind apex at Dingle Dell takes more minerals than I managed to summon all weekend. 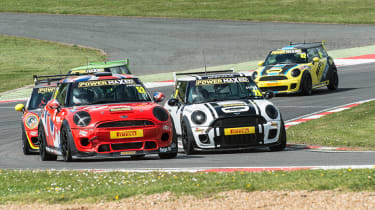 3. Driving a racing car on track is so different to driving a road car on track. In a road car, even a high performance car or a lightweight track special, you’re aware that you’re asking it to perform right at the limit of its abilities. You’re invariably a notch or two back from driving the circuit completely flat out. A competition machine, though, is so much more durable that you can drive harder, making far fewer allowances for the car. That means you’re actually more conscious of driving a race circuit than you are of driving a car, so you think harder about lines, braking points and apexes. It’s the circuit, rather than the car, that demands your attention.

4. Get a reasonable qualifying lap in early. Our quali session was just 15 minutes long. I took the first few minutes to have a good look at the full length GP circuit, but that turned out to be a liberty. Halfway through the session a car spun into the gravel and brought out the safety car. The session was over before I’d put in a quick lap and I was way down the grid. Pretty much at the back, in fact.

5. Sequential gearboxes are excellent. I adored the sensation of pulling gear after gear down Brands Hatch’s long straight with my right foot pinned on the throttle. In the Mini Challenge car you have to dip the clutch on the way down, but you very quickly learn to just give it a very short, sharp kick as you bang forward on the tall gear lever. 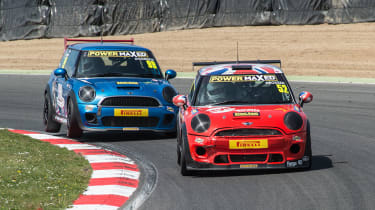 6. The red mist will descend. While setting lap times in a road car for a magazine story, or when running around on a track day, I’m always acutely aware of the consequences of having an off. Y’know, like losing my job. Or breaking a leg. In a race situation, though, when there are rivals to be beaten, all those concerns just drift out of the window. Freed from the anxiety of hurting myself or damaging the car, I could concentrate on committing to corners and keeping up with the pack. This was the biggest revelation of the weekend.

7. Be aggressive from the start. There are three Mini Challenge races each weekend. In my first two races I got mugged away from the line by the previous-generation cars behind, probably because I was concerned about cold tyres. In the third race, I got a better start and committed harder to the first few corners, which kept those chasing cars behind. Rather than worrying about having a problem on cold tyres, just get your head down and deal with the problem if you do happen to have one. 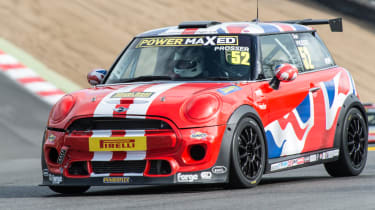 8. The Mini Challenge is a serious championship. The pace at the front of the grid is outrageously hot – there are guys who have won races in the Renault Clio Cup (win that championship and you’ll probably become a British Touring Car driver), career-minded youngsters with a very modern, holistic approach to their racing and older guys who have decades of experience. With this new F56-generation car, the Mini Challenge will surely become – along with the Clio Cup – the go-to series for aspiring professional tin top racers.

During the weekend I improved my finishing position from 19th of 25 starters (half of whom were in the older, slower JCW car) in race one, to 15th in race two and on to a best of 10th in race three. Yeah alright, I hardly set the Mini Challenge alight on my debut, but I reckon I took a great deal away from the experience. The good news (for me!) is that I’ll be back in the car at the end of June for round five of the series. Time to put these lessons to good use.