Aston Martin Vulcan: video, latest news and all you need to know

Aston's V12 racer may be loosely related to the One-77, but in all other respects it's an out-and-out racer 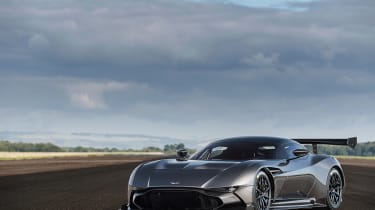 This is the latest and greatest hypercar Aston Martin has released. It’s named the Vulcan, and it’s a track-only V12 monster to rival the likes of the McLaren P1 GTR and Ferrari FXXK. The Vulcan made its official debut at the 2015 Geneva Motor Show, and customers are finally taking delivery of their cars – which require transporting to various racetracks around the world, as the Vulcan is not road legal.

Only 24 examples of the Vulcan will be built – a number inspired by Aston Martin’s success in 24-hour endurance racing – and each commands an asking price of £1.8m. Headline news is of course the car’s 7.0-litre V12 engine, which contrary to popular trend is naturally aspirated and does without a turbocharger or complex hybrid system. It’s tuned to offer over 800bhp.

The shortlist of cars we’d like to drive flat-out at Circuit de la Sarthe – hosting venue of the Le Mans 24 Hours – isn’t actually that short.

But one could do much worse than the latest batch of ultra-exclusive track-only hypercars and of those, the Aston Martin Vulcan has to be among the favourites. There’s not a modern racer at Le Mans that sounds quite as right being extended along Hunaudières, the famous Mulsanne Straight, each gear hammering home for another bout of rampant acceleration. Check out the video above to see more.

evo’s Jethro Bovingdon joined Aston Martin factory racer Darren Turner for a ride in the Vulcan back in 2015, and experienced Snetterton race track from the passenger seat. Here’s what he had to say…

I’ve been in a few GT3 cars and climbing into the Vulcan is a very different experience. It’s beautiful. The interior was intended to have the feel of a racer but with the exquisite finish of the One-77. The gorgeous steering wheel has all the major controls on it like a racer but the design and materials create something that’s as much art as function.

Today the engine isn’t fully unleashed but it feels mighty as we pull out of the pit lane and sweep onto Snetterton. The Vulcan is a big, wide car and it feels it at the first tight hairpin, the tail slipping sideways and the traction control cutting in as Turner makes a swift correction. But once up and running into the faster turns the aerodynamic grip starts to take hold and the car seems absolutely nailed to whatever line he chooses. It’s a spooky feeling as the car tips in and your brain is convinced you’re about to disappear into a gravel trap only for it to turn with no drama and then thunder out onto the next straight. The brakes feel superb too, hanging me on the four point harnesses with a tireless ferocity.

Turner completes a handful of laps, each one slightly faster than the last but well within the Vulcan’s comfort zone. I suspected this might be a bit scary but actually I’m smiling (and sometimes hooting with laughter) and just enjoying the noise, the acceleration and the massive lateral Gs that this extraordinary machine serves up. Early days or not the Vulcan is already a spectacular machine to experience and I’m sure the 24 guys and girls lucky enough to be buying one will love it to death.

Breaking even further with track-car tradition, the Vulcans engine is front-mounted, rather than the mid-engined layout in its McLaren and Ferrari rivals. It sits inside a carbonfibre tub, which is crafted using the same mould as the one from the One-77. It sends its power to the rear wheels via an Xtrac six-speed sequential gearbox. 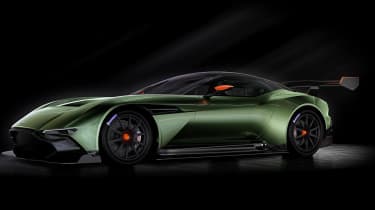 The Vulcan also gets a limited-slip differential and magnesium torque tube with a carbon propeller shaft. Brakes are carbon ceramic discs – 380mm at the front and 360mm at the back.

F1-style pushrod suspension is further aided by adjustable dampers, and the whole thing rides on unique 19-inch Michelin tyres.  Adjustable anti-roll bars and variable traction control offer a tailored level of driver assistance. Weight has been kept to just 1,350kg – 150kg less than the One-77 with which it shares its structure.

The Vulcan is designed to meet full FIA race specifications, meaning it’s eligible to compete in several race series worldwide. Designer Marek Reichman says it could even be a full GT3 car with some simple modifications, but in current form would qualify for some races like Bathurst.

Engineering firm RML is heading in the other direction, and says that the Vulcan can be converted to road-legal status with just a few adaptations. Lighting needs to be changed, and safety and emissions testing also needs to be carried out, but the end result could be the most convincing road-going racer around...