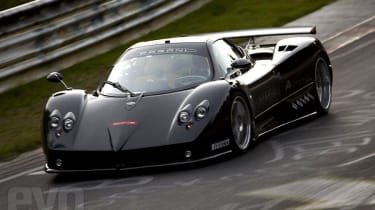 The Porsche Carrera GT is no longer the fastest production supercar around the Nürburgring Nordschleife. That honour now rests with Italian supercar builder Pagani after Nordschleife expert Marc Basseng drove a road-going Zonda F Clubsport around the challenging 12.9-mile lap in just 7:27.82, eclipsing the Porsche’s unofficial record by almost 4sec. Although domiciled in Modena, Pagani founder Horacio Pagani is Argentinean by birth, and the Zonda F’s lap record attempt was his way of celebrating the 50th anniversary of Fangio’s greatest race victory, in the 1957 German GP, which, of course, was held on the original Nordschleife. The car – loaned back to Pagani for the record attempt by a very loyal and trusting customer! – was completely standard, and therefore fully homologated. evo was granted exclusive access to the record-breaking lap, and you can read the full story, together with our own unique tribute to Fangio’s legendary race win, in next month’s issue (112), on sale 14th November.