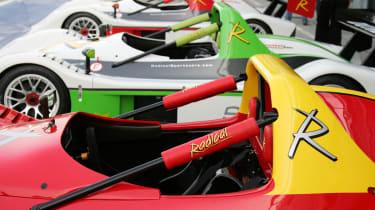 In the midst of the mayhem currently surrounding car manufacturing in Britain there is one company bucking the trend of doom and gloom and enjoying the most productive time in their eleven-year history. The 80-strong workforce at the Radical Sportscar factory in Peterborough has never worked so hard, having built some five cars a week over the winter months and the order books are still bulging with another 40 cars pre ordered.

Co-founder Mick Hyde puts the success down to the right product and global expansion that has made the most of the weak pound. ‘We’re still taking orders in the UK,’ he told us, ‘but it has been the emerging markets in places such as wide ranging as China, Mexico and Saudia Arabia that have pushed things forward. European sales have remained solid and we have just appointed a distributor for Holland, our eighth in Europe.’

It is the 1500cc biked-engined SR3, originally introduced in 2002 that still represents the bulk of the orders, thanks mainly to its versatility to work as equally well as a trackday car, a racer and a road car. With all the updates for ’09 it now costs around £70,000, but their second most popular machine in terms of sales is their most expensive. The SR8 is fitted with their own high-revving V8 that costs from £100,000 in 2.6-litre, 380bhp form.