Video of evo's Dunlop Race Academy, including the crowning of our winner. Find out how his racing debut went 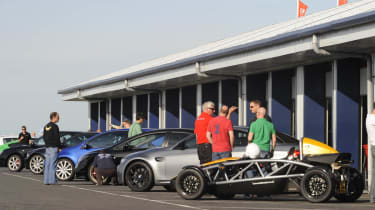 The winner of our Dunlop Race Academy competition proved his mettle on his race debut at Donington Park. Simon Clark was victorious in the final of our competition to find a racing driver, which took place at the final evo Trackday of the year at Silverstone on September 8. He’s an experienced trackday-goer and owns both a Porsche 911 GT3 and Boxster S, and made it to the Race Academy final after being plucked as the biggest talent from a Bedford evening by our own Henry Catchpole.

Fast forward a couple of months and he clinched two second in class results in RJN Motorsport’s Dunlop Sport Maxx Nissan 370Z at the revamped Donington. ‘As an experience, it was awesome’ Simon said. ‘I’d love to race again’.