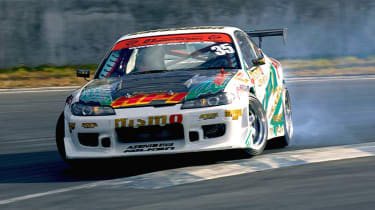 What's the longest oversteer slide you've ever ridden out? Three, four, maybe five seconds? Well sorry to brag, but my record is 147 seconds.

That's right, two-and-a-half minutes of tyre-smoking, ball-busting powerslide. Impressive, heh? Okay, okay, so I wasn't actually driving the car, but even from the passenger seat it rates as the best in-car experience I've ever had.

The venue is Japan's Fuji Speedway, the event Nissan's annual Nismo Festival, and the two-and-a-half minute man is Nobu Kumakubo, one of the very best D1GP drivers in the World. Famed for his attacking style and a fearless ability to put opponents under sustained, point-blank pressure during D1GP's hair-raising two-car drift battles, it's Kumakubo that I'm strapped next to, in Nismo's Silvia S15 D1GP car. For the full story, see the February 2006 issue of evo. For a taster of what Richard Meaden experienced, click on the video link.