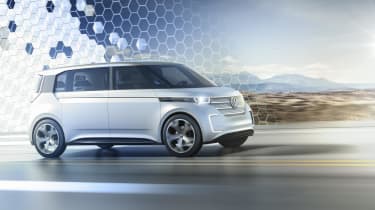 An all-electric mulit-purpose vehicle isn’t the first class of car you’d expect to see on evo.co.uk, but there’s a great deal more to Volkswagen’s latest concept, launched at the Consumer Electronics Show in Las Vegas, than meets the eye.

Not that what does meet the eye isn’t curiously appealing. You’d struggle to call the Volkswagen Budd-e a retro design, but with a subtly V-shaped grille behind a large VW badge, a nearly one-box form and wide rear pillars, it’s certainly designed to evoke the spirit of the classic Type 2 microbus that became a figurehead of the flower-power movement.

Volkswagen of 2016 is a little more clinical than it was back then and chastened by revelations of emissions cheating, which is perhaps why the Budd-e is all-electric. 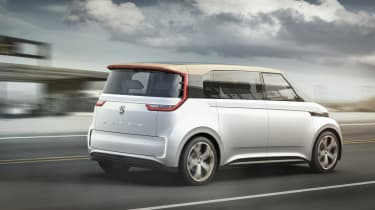 VW has made use of the car’s large, square stance to fit a 92.4 kilowatt-hour battery pack – that’s almost four times what you’ll find in a regular electric car like the VW e-Golf. As such, a 331-mile range is quoted on the European cycle – more than three times as far as that e-Golf will cover on a charge. Around 80 per cent of the battery’s capacity can be replenished in 30 minutes, by either plugging the car in or using inductive charging.

More important than the statistics of a concept car is the Modular Electric Drive Kit (MEB) platform on which the Budd-e sits.

While not yet confirmed for any production vehicles, the dedicated electric platform – which does away with the need to account for any combustion engine packaging constraints like space for fuel tanks, engines and exhaust systems – is sure to play a part in future VW electric vehicles.

The design promises greater cabin space than before even on smaller traffic footprints – think smaller, lighter vehicles with the interior volume of current cars.

That in turn boosts agility (as does the ability to mount the battery low in the chassis), while designers will have greater freedom too. Without the need for a traditional drivetrain, some tropes of the standard production car can be ignored. VW says it’s cost-effective too. 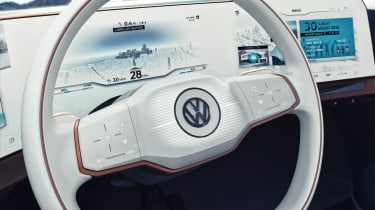 We’ll start to see some of the Budd-e’s interior features sneaking into production vehicles too. The third-generation multifunction steering wheel features two-stage touch feedback – allowing a driver to determine a button’s function without taking their eyes off the road, before another touch feedback lets them know the control has been activated.

There’s gesture control too. Used to dubious benefit in the new BMW 7-series, the Budd-e also uses it outside the car – a swiping motion can open the sliding doors – and cameras inside can do similar, with gestures to open doors or activate functions on the wide display screen. At the show, VW also presented the e-Golf Touch – a production car that brings gesture control to the C-segment.

Myriad other functions are found in the Budd-e concept, from integration into the ‘Internet of Things’ – allowing you to control home functions from the car, and vice-versa – to a system that reminds users if they’ve left anything (phones, wallets and so-on) in the car.

There’s customisable ambient lighting, and even a function that automatically plays predetermined songs at certain points on a road trip – VW uses the example of Hotel California on the Oakland Bay Bridge, but Highway to Hell on the A666 in Lancashire would be equally appropriate. And as no modern concept car would be complete without autonomous functions, Budd-e can also drive itself.

In simple terms, see the Budd-e not as an electric MPV, but as the embodiment of several concepts likely to filter into Volkswagen production cars over the next decade. You can read about more from the Consumer Electronics Show on our hub page.