306bhp lightweight special looks to be most hardcore GTI ever made 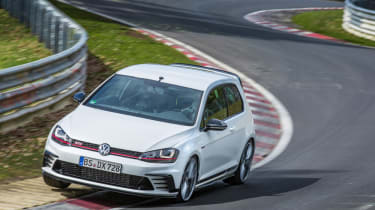 The Volkswagen Golf GTI Clubsport S is the most powerful GTI ever produced. At 306bhp and with 280lb ft of torque, the car has set a new front-wheel drive Nürburgring lap record, with a time of 7:49:21.

Only 400 of the Clubsport S will be produced, with the car making its first public debut at the GTI meet at Lake Wörthersee on the 4th May. The car is based on the 'standard' GTI Clubsport and has been produced as part of Volkswagen's 40th anniversary celebrations of the GTI. It will be available in the same three colours of the original GTI - Tornado red, Pure white and Deep Black Pearl Effect.

Modifications to the car over a standard GTI are extensive. The Clubsport S has an unladen weight of 1285kg, which is a significant drop over the standard two door GTI's 1348kg. The standard Clubsport itself is 30kg heavier than the S. 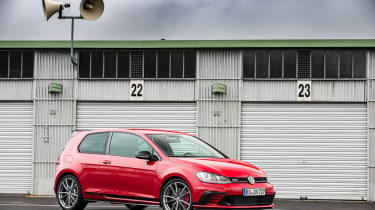 The Clubsport S development team worked closely with those behind the GTI TCR race car. ECU tweaks and a new higher output fuel pump have allowed for the permanent increase to 306bhp. The engine remains the 2-litre turbocharged EA888 unit found in the GTI and Golf R.

Also unique to the Clubsport S is its exhaust system which not only reduces backpressure but will cause the car to crackle and pop more under braking.

Volkswagen has incorporated various new settings for the ESC and drive modes in the Clubsport S. Firstly, the ESC has been altered to intervene even later and reduce torque less, while the eletronically controlled VAQ front differential lock, just like in a normal Clubsport, has a variable degree of locking and works in tandem with the ESC. 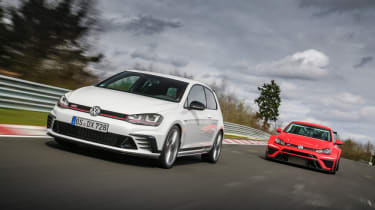 A new Nürburgring setting for the dynamic chassis control has been developed to cope with the conditions that the racetrack presents. Designed to help improve body control over the undulations and bumps that you find at the Nürburgring, Volkswagen's description of the new mode actually makes it sound softer and more road-friendly than you might expect.

Tyres come in the form of Michelin Pilot Sport Cup 2s sat on 19-inch 'Pretoria' alloy wheels. The brake system is also unique to the Clubsport S and features aluminium brake bells and covers, reducing unsprung mass by a kilogram per wheel. Volkswagen claims the modifications will further improve the brake's performance on track and includes more track orientated pads on the car straight from the factory. 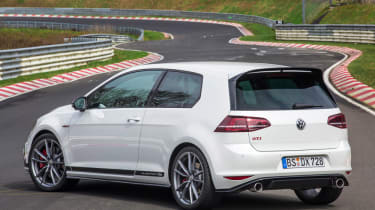 Design changes for the Clubsport S include a black painted roof, a production number for each vehicle stamped on the centre console and racing bucket seats. Like the conventional Clubsport, also included is the golf ball gear knob, red line in the seat belts, piano black trim and an alcantara trimmed steering wheel.

Pricing and release date of the new two seater, three-door GTI Clubsport S are still to be announced. We will update you as and when we have them.